You are here: Home / Cycling Reviews / Average Joe Cyclist Bike Trail Reviews / The Central Valley Greenway – If a Greenway is full of Semi’s, is it still a Greenway?
Pin
Share
Tweet

If a Greenway is full of Semi’s, is it still a Greenway? The Good, the Bad and the Ugly on the Central Valley Greenway

(Note: this is Part 1 of a 2 part series on the Central Valley Greenway. You can find Part 2 here.)

There are moments on the Central Valley Greenway (CVG) when you could be on the wonderful Galloping Goose Trail in the wilds of Vancouver Island – and other moments when you are just half a metre away from certain death. Oddly, these moments are sometimes just minutes apart. That’s how startling and abrupt the transitions are on this ambitious, largely wonderful, but also deeply flawed bike route.

The Central Valley Greenway runs all the way from the New Westminster Quay, via Burnaby, to Science World in Vancouver – a total distance of 24 km. It could be the perfect solution for commuters – if only it weren’t for the downright UGLY bits. Most of these are in the New West to Burnaby section, the first 15 km. I’m going to talk about that section in this post, and go on to the better part (from Burnaby to Science World) in a subsequent post.

Here is a video that shows the entire CVG, speeded up three times.

Signage on the Central Valley Greenway

The signage on the Central Valley Greenway is AWESOME – some of the best I have ever seen on any bike route anywhere. It was not always this way. I went on the inaugural ride on the happy summer day when the route was officially opened.

On that day, the signage was far from complete. But clearly there had been a mad scramble to get everything ready for the Grand Opening – so there were several paper signs taped to light posts along the way! I found this quite endearing: it showed that they really tried.

And that’s the almost poignant thing about the Central Valley Greenway. They really, really tried. In fact, you’ve just gotta give them full marks for trying. The spirit was so very willing – but unfortunately, the execution was sometimes lacking. At times the route soars impressively to the heights, like this bridge – but at other times, it really, really sucks.

Starting off in New Westminster

The Central Valley Greenway is like the little girl in the poem: “When she was good, she was very, very good – but when she was bad, she was horrid!”

The first part of the CVG combines both the very, very good, and the horrid. Starting off on Columbia Street from the quay is not an auspicious start. You’re on Columbia Street in central New West – an interesting, historical place to be – but no place to be on a bike, the painted bike lanes notwithstanding! I am going to put in suggestions on how to make the Central Valley Greenway all it clearly aspires to be, in case anyone in authority ever reads this post (and I will do my best to make sure they do). Here’s the first:

Suggestion # 1: Make the Columbia Street part a physically separated bike route (see for example what has been done on Dunsmuir Street in Vancouver).

After cycling in heavy traffic up the hill past Royal Columbian Hospital, you reach the happy, happy spot where you turn right onto Sherbrook Street. From here on you are on quiet residential streets all the way to Hume Park.

Hume Park is one of the Good parts of the Central Valley Greenway, as you might guess from the word “park.” It’s regrettably short, but fun while you’re in it. Two items of note in the park:

After Hume Park a pedestrian crossing gets you across the very busy Columbia Street. Then you get to one of the Bad bits – blessedly short. You’re on a very narrow sidewalk, next to Columbia Street. Cyclists are supposed to travel in both directions here, and also a sign requests that cyclists yield to “peds”. It’s all just an accident waiting to happen – one day a cyclist or pedestrian could be pushed off into the stream of very fast-moving traffic. 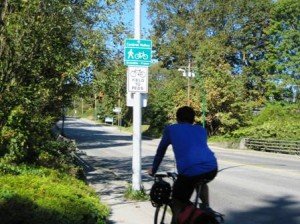 Suggestion # 2: Fix this somehow! I really don’t know how … but there must be an engineer somewhere who could figure it out! 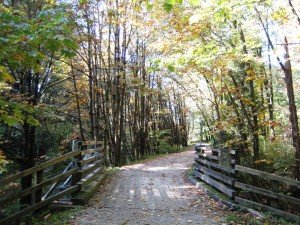 Assuming you have made it this far, you are now in for a treat. Turn sharp left off the sidewalk, and suddenly you are in cyclist heaven. This part of the route meanders for about 3 km next to the Brunette River. It’s just as stunningly peaceful and beautiful here as the Galloping Goose Trail – and yet you are actually travelling between two major highways, Lougheed and the TransCanada.

Watch this video for a sense of what it feels like to be cycling on this part of the CVG:

I only have one quibble with this part: there are no lights. This effectively eliminates the Central Valley Greenway as a commuting route from New West to Vancouver in the winter.

Suggestion # 3: Put lights along the Central Valley Greenway in the Brunette River Natural Area (like the lamp posts in the other parts of the route)

You will find yourself feeling relaxed and happy next to the Brunette River. You may feel that the bad bits are behind you, and that now you can relax and enjoy the GREENway. That would be a mistake, because soon you will pop out of the forest, and quickly find yourself at the intersection of Cariboo and Government Streets. The photo of a train, bus and cars (and a very unsurprising absence of cyclists) at the top of this post was taken at this intersection.

Once you have waited for trains and traffic, and managed to get though this horrible intersection, you are on Government Street for one block. This is a brief respite from the horror, as a separated bike route has been erected here, to protect cyclists from the traffic. No wonder this guy looks so happy! 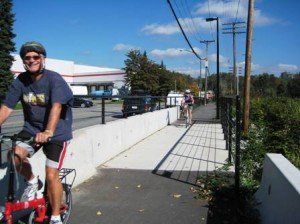 But at the end of this block, you hit the truly UGLY part of the CVG. Government Street becomes Winston Street, and simultaneously becomes a truck route. Granted you have a fairly wide bike lane to travel in, but you are right besides heavy, speeding traffic.

You totally have to check out this video – it shows the very, very worst of the Central Valley Greenway – one of those moments when, as I said, you are just half a metre away from certain death, while on the “Central Valley Greenway.” This video was not even taken at rush hour. I ask you, what part of this scenario is reminiscent of a green valley?

Seriously, is this safe cycling for everyone? Would you want your grandma or your child this close to a semi? While I was negotiating this horrible part – which goes on for a full 5 km – I had to chuckle as I remembered the words in the official Central Valley Greenway Route Map:

“Most sections are suitable for all kinds of walking and wheeling (pedestrians, … cyclists, wheelchair users … )”

Yeah, right! I’m here to tell you that even cyclists were scarce on this part of the Central Valley Greenway – and I damn sure never passed any wheelchair users!

Finally you get to the part of Winston Street where the route goes onto the sidewalk, and if you have an ounce of religion in you, you thank your God. A block later you reach the wonderful pedestrian bridge.

Just in front of the bridge is one of the whimsical bits of practical (impractical?) art that have been installed alongside the Central Valley Greenway. It’s kind of a bike rack, but an arty version. Not particularly useful, as no one in their right mind would actually leave their bike parked in a spot like this. But nevertheless, pleasing in a totally useless, arty kind of way. Like the hand-taped signs when the CVG opened, these bits of art remind you that somebody, somewhere is really, really trying.

And here’s the Good News: once you have cycled up this bridge, and are sailing down the other side, all of the truly UGLY parts of the CVG are behind you. From now on, it’s all downhill, metaphorically speaking. To read about the rest of this trail, click here.

UPDATE: Please see the very encouraging response to this critique, from Translink’s Planning Department – although I have to add that as of April 2014, none of these promises have actually been fulfilled.

To support this blog, please consider clicking on one of the Amazon links before buying from Amazon. A small commission from Amazon helps pay for our time. It costs you nothing at all except a click. For more information, please see “How Our Affiliate Links Work” in the right-hand side bar (down below if you’re on a mobile) or our Policies page.

If you don’t want to buy anything, fair enough – but please consider supporting this blog by SHARING this post (using the Share buttons below) or by LIKING our Facebook page. BEST OF ALL – just SUBSCRIBE to our blog (click on the link below, next to Mrs. Average Joe Cyclist’s lovely face). It makes you part of our community, and makes sure you get free updates about all our posts, once a week. Thanks in advance – reader support keeps us going and makes it all worthwhile!