I have finally achieved my dream of starting to commute to work by bike! I am now officially a bike commuter! 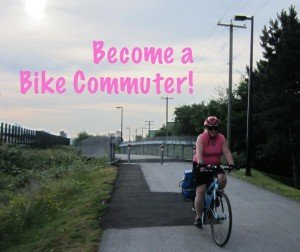 In 2009 I had back surgery and was forced to stop running.  My doctor recommended cycling.  I had given up cycling years before due to back problems, so I was initially reluctant to try. But after having a proper bike fitting, I was able to return to recreational cycling. In fact I have been a faithful companion in rain or shine on most of the trail rides that Joe has blogged about over the years.

However, I’ve long admired Joe’s dedication to being a bike commuter – and I have noticed over the past few years that he has managed to shed over 60 pounds, improve his cardiovascular health and cure his high blood pressure.  What’s not to like about that?

Related: 8 Tips to Plan for Success as a Woman Bike Commuter

This summer my chance to be a bike commuter has finally come. We live in Burnaby, and I have a new job downtown. The ride is 12 km each way, all on cycling routes, and most of it either off-road on the Central Valley Greenway (Thanks Translink!) or on separated cycling lanes (Thanks Gregor Robertson!).

I managed to find a downtown gym a block away from my office where I can shower, change and store my personal items in a locker.  My building doesn’t have showers yet, but it has awesome bike storage in a locked cage with surveillance and security guards. The storage also has lockers but you can’t leave things there overnight. Hmmm … time for some activism of my own.

My goal – Become a bike commuter and cycle 3 days each week from North Burnaby to my office in downtown Vancouver and back. 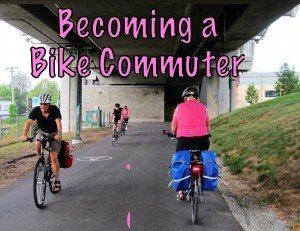 The Central Valley Greenway makes cycling from Burnaby to Vancouver safe and flat, and even keeps the rain off sometimes! Thanks Translink!

Uggghh – getting up ½ hour earlier to get to work at the same time!  What am I doing?  Not only that, it’s raining! Oh well … if you don’t do it in the rain in Vancouver you don’t do it all, right?  I’m on the bike and it’s not so bad. I’m surprised that I am going at a pretty good pace. I still got it – ha!  I remember when I used to run in the spring rain and it kept me nice and cool. Not too many cyclists on the road, but I’m loving it now. This will be the worst ride since I’m taking two full panniers, stuffed with showering supplies, food for my lunches, a couple of sets of clothes, my purse and a small brief case.

I’m heading home. Legs feel pretty good and the sun is out, but it’s still cool. I am proud that I managed to bike the short but steep uphill that I avoided on my practice run on Sunday. Such a green warrior! And I’ve finished my first day as a bike commuter!

A few more bike commuters on the road but I still have a lot of room. Halfway home it starts to rain but I keep going without a coat. It’s not cold and I’m going to take a shower anyway.

I end up at home at basically the same time as I would have done taking transit, but I feel so much better.  Alert, fatigued, and mildly elated. These words would not describe my feelings after being on a crowded Skytrain.

Up and at it again.  First day of sun!  I throw my leg over and mount the bike on the trot. Reminds me of being a kid. Good ride into Vancouver with more cyclists out. At some crossings I imagine I’m in a peloton at the Tour de France. Okay, we’re a little fatter and scruffier than that!

Even after a short walk to the gym, a shower and change and short walk back to my building, I’m still at my desk at the usual time.

Best of all I’m cheerful from the ride, not grumpy from standing on a crowded, hot commuter train. Being a bike commuter is its own reward!

Time to go home.  I get on the bike and can immediately feel the fatigue in my legs.  Uh-oh this is going to be a long ride home.  Not only that I forgot to fill up my water bottle!  There’s only one short steep hill between me and the water fountain at the entrance to the CVG (Central Valley Greenway).  I make it but only barely.  After some water the ride gets much better but I was glad to get home.

I’ve met my first week’s goal as a bike commuter – yippee!  But I am very glad to be off the bike today.  My legs are very strong from my years of running, but I’ve been off the bike for about a year and I can sure feel it.  Even my feet are tired.  My butt – not so bad – go figure.  Not sure if I’ll ride on the weekend because next week I’d like to cycle all three days.  We’ll see … 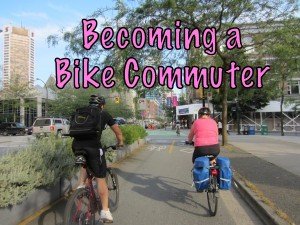 The separated bike lanes in downtown Vancouver mean
even grandmas like me can bike to work safely.
Thanks Gregor!

Did you like this post about how to dress for winter cycling? If so, please support our blog:

We spend a lot of time writing these posts, and we would appreciate it very much if you would SHARE it with others (using the Share buttons) or LIKE our Facebook page. If you really want to show your appreciation, please consider clicking on one of the Amazon links

before buying from Amazon; or clicking on any of the other affiliate links on this page. Small commissions help pay for our time. Or BEST OF ALL – just SUBSCRIBE to our blog. It makes you part of our community, and gets you free weekly updates about our posts – as well as a Free Download of our Bike Buyer’s Guide. Thanks in advance – reader support keeps us going and makes it all worthwhile!