This is an up-to-date listing of the best cheap bike computers under $65. We update this page regularly, always reflecting the current best selling but CHEAP bike computers. Not everyone wants to spend hundreds of dollars on a high-end, premium Garmin Edge or Wahoo bike computer. For many of us, simple and easy-to-use at a budget price is the way to go. All of these bike computers are extremely popular and are highly rated by cyclists. Most have been selling well for decades, and are supported by a solid base of satisfied cyclists. All of these products are sold by trusted companies with a solid reputation for high quality, budget bike computers.

Please note that as an Amazon Associate I earn from qualifying purchases. It costs you nothing at all.

No. 1: Most Popular, Classic Cheap Bike Computer – the CatEye Velo 9

The CatEye Velo is a long-time favorite with cyclists who simply want to know how far and fast they cycled. And who don’t want to spend a lot of money for this information! The CatEye Velo 9 is an upgrade to an old favorite, and is even better – for less than $35! This upgrade includes a larger screen. Also, the setup has been simplified with pre-programmed tire sizes.

Related Post: 7 of the Best Bike Computers – from Budget to Premium

For less than $35 you get both of the upgrades above, plus the old standards:

Add in simple one-button operation and a universal bracket that you can easily install on your stem or your handlebar – and you have the hands-down best bang-for-your-buck bike computer on the market! CatEye has been around since 1954, and is the global leader in bike computers. They know what they’re doing.

Video of the CatEye Velo 9

This short video shows you what the CatEye Velo 9 is like:

The Cateye Velo 9 is wired, but a lot of users find this to be more straight-forward than wireless bike computers. If you want wireless, you are going to have to spend a bit more money.

The CatEye Strada Wireless Bike Computer is small, light and very affordable, and will do all you want as long as you don’t want to track your rides geographically (it does not have a GPS) or upload your data to analyze. Basically it has a wireless sensor that you put on your fork, and it then calculates your speed, time and distance.

While you are cycling, the CatEye Strada will show a whole lot of data, including:

In testing I found the CatEye Strada easy to mount and use. The CatEye Strada is shipped with batteries and a universal tool-free FlexTight bracket, and is easy to mount. The supplied battery will last up to a year (when used for 1 hour per day), and will alert you when it is low. Personally, I would always charge it before first use, rather than relying on the factory.

The CatEye Padrone Cycle Computer is a long-time favorite with many cyclists. It is a reliable, straightforward wireless bike computer with a huge display. CatEye claims it is the largest display on the market. Add in super lightweight and a battery that will last for a year, and you have a very attractive bike computer at a very affordable price.

Also, in response to customer requests, the Padrone has been updated with a stopwatch feature. The CatEye Padrone gets rave reviews from users.

Here is a useful video showing how to set up the functions of this bike computer.

The Sigma Sport BC 5.12 is a classic but cheap bike computer that is super simple to use. It’s quick to mount it to your bike, simple to program, easy to use, and offers straightforward, single-button operation. Predefined wheel sizes increase the simplicity of set up. And you can expect up to 100 hours of ride time per battery charge.

Three bike functions and two time functions are packed into an attractive, modern design that takes up a minimal amount of space on your handlebars. Clearly, this is perfect for the cyclist who wants information with a minimum of fuss.

Batteries are included, and it’s a cinch to install, with no tools required (although needle nose pliers will speed up tying down the cables). All Sigma products are hand tested and packaged in the Chicago suburbs.

Video Showing How to Install a Sigma Sport Bike Computer

The price on this unit is ridiculously low for a wireless bike computer. Of course, it does only the bare minimum:

It is also waterproof, and it ships with the required batteries for the transmitter and the unit. But it costs less than $20 … so, it is not entirely surprising that it gets mixed reviews. It seems that some people cannot manage to get it set up properly and/or get it to work. On the other hand, those who do manage to set it up properly and get it to work, rave about it being good value for money.

Bottom line: if you want a wireless bike computer, and you want only the most basic functions, and you are willing to risk sixteen bucks, then this is worth giving a shot. Of course, if it doesn’t work you can get your money back, but that it a little bit of a hassle. But it’s Amazon, so basically you request a return, print out the mailing labels, and mail it back for free.

Tip: don’t try this one if you have chunky front shocks, as these make it harder to set up the Soon Go bike computer.

The CatEye Enduro bike computer is a firm favorite with many cyclists, particularly mountain bikers, because it is rugged, with a thick cord (although it’s a little short) and a strong case. Because you install it with zip ties, installation is nice and simple. And it is easy to read the large display. It has a number of basic functions, which you can scroll through with the single button. Functions include:

This cheap bike computer also has auto start and stop, and auto-pause for when you stop riding for a considerable period of time.

No. 7: German Engineering at a Very Low Price: SIGMA BC 7.16 Bike Computer

This simple bike computer is available in wired and wireless options, at a very remarkable price – around $22 for the wire version.

It is a firm favorite with those who want a basic bike computer with no fuss, no muss. It features an easy to read, large display.  Plus, you can choose from SEVEN languages!

This bike computer is designed to be mounted without tools. It has pre-programmed tire sizes to make setup easy.

It also offers an automatic start and stop feature, which is very useful for those who are forgetful (like me).

If you don’t need navigation or GPS records, it is totally possible to get a decent bike computer for less than $70. And you can expect it to last for years, too. We hope that one of these cheap bike computers will be exactly right for you! 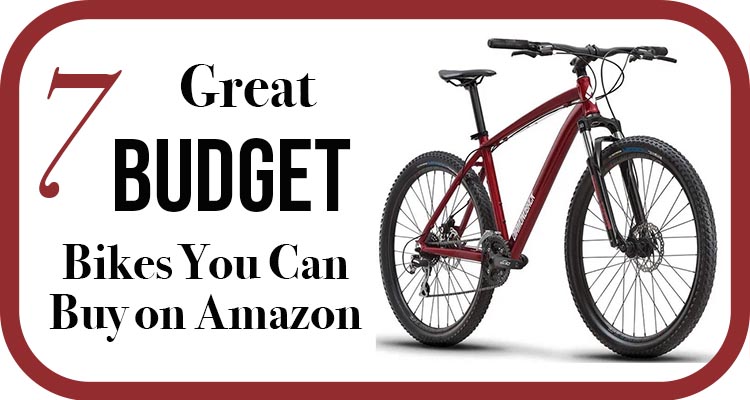