I have had every kind of cycling knee pain!

Knee pain is the most common injury for all athletes

Also, cycling knee pain is common because the movement in cycling is very repetitive – when cycling for an hour, we average up to 5,000 pedal revolutions. Apart from that, high mileage, and the rapid increase in training intensity that many of us cannot resist in early spring, can both lead to cycling knee injuries. (Source: CPT Chad Asplund – see source list at end of post.)

As you can see from this table from a medical research report, there are all kinds of cycling knee injuries that can be caused simply by an ill-fitting bike, as well as by training excesses.

So, in short, cycling knee injuries pain are so common that it’s almost impossible to avoid cycling knee pain. However,  nothing will make me quit cycling – not even crippling knee pain. In fact, I remain committed to trying to do ambitious things, like riding charity bike rides – and just simply riding a bike until the day before I die. Move it or lose it, right?

So, I have tried every kind of recommended cure for cycling knee pain. I have gone through more expensive tubes of the homeopathic remedy Arnica cream than I care to remember. Therapists have manipulated my knees, causing extreme pain as they tried to remove the accumulated toxins that were, allegedly, causing my cycling knee pain. Other therapists have injected Arnica directly into my knees (NOT as much fun as it sounds), and still others have stuck needles into parts of my body (that are NOT my knees) in an attempt to craftily defeat the cycling knee pain via the ancient wisdom of acupuncture.

Thanks to all these therapies, I have blown through enormous quantities of extended benefits, as well as huge amounts of my own hard-earned money.

And as a result of all these remedies and therapies … absolutely nothing happened.

The cycling knee pain remained, and I continued to be terrified that as age advanced on me, my knees would betray me completely and cycling would be pushed away into a sad, dark corner of might-have-been’s and used-to-be’s.

Then one day my naturopathic doctor made a suggestion that I thought was completely insane – as well as probably very messy. So of course, even though I was paying more than $100 an hour to benefit from her wisdom, I completely ignored her. I continued in the ways of my own ancient wisdom, wisely throwing away money on therapies and remedies that patently didn’t work.

After about another year of this blatant (and expensive) stupidity, I finally caved and decided to try the insane and very messy suggestion. One evening, scarcely able to walk, but about to go off and cycle hundreds of miles in Montreal, I was desperate enough to actually try my naturopathic doctor’s suggested cure for my cycling knee pain. 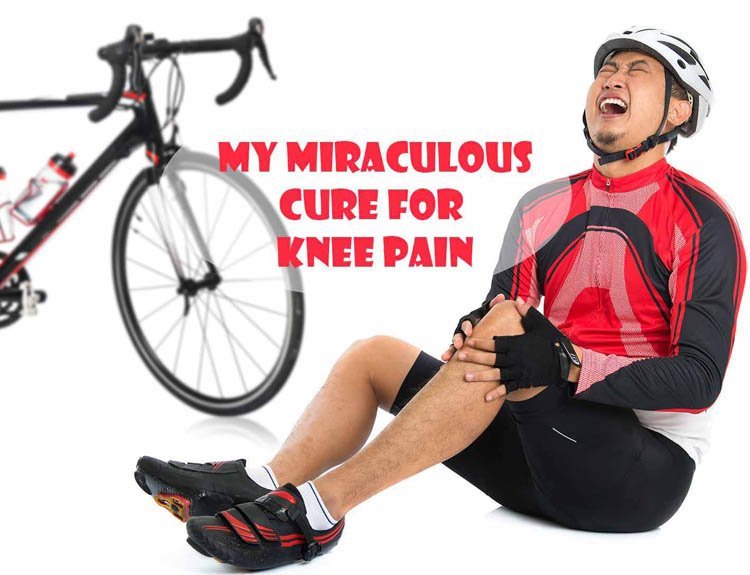 This is what I did: I bought a bottle of castor oil for $13. I lowered myself (not without pain) to the floor to pull my moth-eaten $20 heating pad out of the dusty recesses of the bathroom cabinet (the thing that Maggie refers to as the “old-lady pad”). Then I smeared large quantities of castor oil on my knees, put a kitchen dish towel on top of that, covered that with a plastic packet, and topped it all off with the heating bag. Lovely. (Fortunately, I have a leather couch, so no great harm was done to innocent furniture.)

I left the heating pad on my right knee for 15 minutes, and then switched to my left knee. It was oddly soothing, considering that I have always been taught that inflammation needs cold, not heat. Then I put the whole messy heap away, shaking my head at my own desperation.

The next morning I woke up, and the cycling knee pain was gone! Yes, really. I got on my bike that day and cycled like I was 12 again.

I went off and cycled hundreds of miles in Montreal, and applied my hot castor oil every night. And every day, I was free of cycling knee pain. Since then Maggie has also used this therapy for cycling knee pain, and my mother has used it for arthritic pain. We all say the same thing: it’s a miracle cure!

The theory behind my cycling knee pain cure

The theory is that hot castor oil draws inflammation out. It’s classified as an “old wives’ tale,” but my very modern and well-educated naturopathic doctor swears by it. And so do I, now. I have also used it with stunning success for the pain in my Achilles tendon, which was also caused by vast amounts of cycling. As with my cycling knee pain, castor oil has succeeded where hundreds – if not thousands – of dollars of other treatments have failed.

Try Tumeric as an anti-inflammatory for Knee Pain

Tumeric is a spice that has been used to treat all kinds of illnesses for thousands of years, as part of Siddha medicine. More to the point for me – my mom uses it. She swears by it as an anti-inflammatory, and takes it every single day to prevent aches and pains in her joints and bones. She’s now 76 and has still never been on a prescription med in her life. So I decided to try it for my tennis elbow and … all I can say is that it had dramatic effects. When I take it in the morning, my tennis elbow simply doesn’t happen.

Of course, long term I need to deal with what is causing the tennis elbow (it’s not tennis!). But for now, it’s just great not to have to suffer from it. Also, I think if tumeric has such a dramatic anti-inflammatory on my elbow, it might be doing a whole lot of anti-inflammatory things on my insides. So it’s well worth the rather nasty taste – I just put half a teaspoon of the spice in half a glass of water and chug it. Every.single.morning.before.coffee!

If you prefer to do things in a less horrible way, you can buy Tumeric capsules. It is very well worth a try, given that most knee pain is related to some kind of inflammation somewhere.

Finally, good luck with dealing with your cycling knee pain. And hats off to you for being so dedicated to cycling that you don’t let a little knee pain put you off!

Related Posts that May be Helpful for You

Related Post: How to Prevent Plantar Fasciitis – PLUS our Easy Cure

Related Post: How to Keep Your Feet Warm and Dry for Winter Cycling