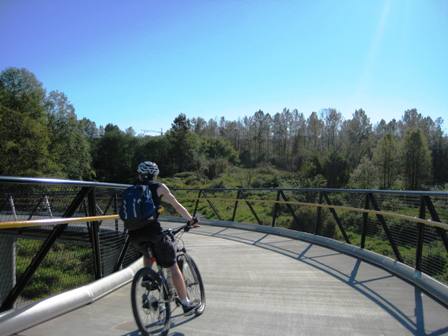 Translink Planning Department has taken the trouble to respond comprehensively to my posts on the Central Valley Greenway, Part 1 and Part 2. I really appreciate this, and decided to post their response in full, so as many people as possible see it.

This response answers a lot of questions about the issues with the Central Valley Greenway (CVG), and also contains some exciting news about plans for the future!

“The CVG was part of Transport Canada’s Urban Transportation Showcase Program, which wrapped up in March 2009 in accordance with the multi-agency funding agreement. There has been a fair bit of criticism on the Buzzer Blog about launching the CVG prematurely, while some segments were incomplete or built to an interim standard.

We were obliged to launch it as close as possible to the federal project deadline of March 31, 2009, after six years of planning and project delivery, and held our opening celebration in June to correspond with Bike Week and the completion of the Winston Bridge, which provided important connections. We acknowledge that some areas are constructed to a interim design standard, due to budget or other temporal challenges. The major achievement of the project was to deliver a functional CVG, and it has been a valuable facility for thousands of people since it was launched.

TransLink values feedback and will share it with our partners. At this point each municipal partner is responsible for improvements along the CVG that will achieve the ultimate design standard. Again, now that the cities fully own and manage their sections of the CVG, comments should be directed to them.

Signage. Compliments appreciated. We will aim for 100% consistency, and timely completion on the next facility. We will also recommend larger fonts for the yellow destination signs.
Jurisdiction: Cities

Columbia Street – downtown.
Average Joe Suggestion 1: separated path
It is quite true, this is a high traffic street and may not comfortable for a good many riders, particularly new or young riders. Downtown New Westminster was considered a CVG destination, and an enhanced cycling facility objective was considered in the context of multiple City objectives: downtown revitalization, aesthetic improvements, enhanced pedestrian environment, and traffic calming. The compromise was to remove two lanes of traffic and to implement back in angle parking, an innovation in this region, which is safer for cyclists than parallel parking and opened up more road space for cyclists.

The ultimate vision for New Westminster is a low level multi-use route running from Braid along the waterfront to the Quay which would provide a scenic, flat and comfortable separated route. It will take some years to acquire the necessary lands and resources to achieve the low level route, as most of it will be implemented as development occurs. This route is also identified in the Metro Vancouver Parks greenway network.
Jurisdiction: City of New Westminster.

The original alignment for the CVG was routed along the Brunette River waterfront through the Sapperton industrial area. Because of serious budget deficiencies, technical challenges of crossing massive rail yard, and the need to meet the project completion deadline in 2009, the route between Hume Park and Cumberland was proposed by the City as an alternate which would provide a connection with the BC Parkway and the New West waterfront at the Quay. The choices were to work with Columbia Street, or stop the CVG at the Burnaby border. It is acknowledged that the on street portions of Columbia are busy and challenging to ride. Again, the low level route along the Brunette River in Sapperton, meeting up at Sapperton Landing (around Cumberland) is the optimal long term solution here.
Jurisdiction: City of New Westminster

North Road
Average Joe Suggestion 2: a solution requested
Exiting Hume Park and entering Burnaby, Columbia Street is actually named North Road. The City of Burnaby has identified the scope required to make a separated multi-use path here which requires path widening and a new bridge across the Brunette River. The New Westminster portion would consist of a multi-use path to the south of the Brunette River.
Jurisdiction: Cities of New Westminster and Burnaby

Brunette River Natural Area
Suggestion 3: lights
This corridor is owned by Metro Vancouver and managed by its Parks department. Metro Vancouver Parks has a policy of no lights in this area, for reasons of environmental sensitivity and because lights might create a false sense of security in this forested area which has limited visibility and surveillance at night.
Jurisdiction: Metro Vancouver Parks

Cariboo Road
The unfinished intersection at Government was problematic for over a year and a source of frustration to all. The City was waiting for the railroad to install panels to permit a level crossing of the tracks, which only they can do. This work was completed in September 2010.
Jurisdiction: City of Burnaby

Winston bicycle Lanes
Average Joe Suggestion 4 – separated path
The City of Burnaby’s long term plan is to replace the existing bicycle lanes on Winston with a separated multi-use trail (aka “Urban Trail” in Burnaby), exactly as per your Suggestion 4. This would make a huge difference to the quality of experience on the CVG east of Sperling for both cyclists and pedestrians. At present, there is no sidewalk on Winston and so the CVG pedestrian traffic is routed through Metro Vancouver’s Burnaby Lake Regional Park, which for the same reasons as the Brunette River Natural Area, has no lighting and is only open during daylight hours.
Jurisdiction: City of Burnaby and Metro Vancouver

The map – and suitability ratings.
TransLink notes the excerpted quote from the CVG Route Map: “Most sections are suitable for all kinds of walking and wheeling etc”. This is a really helpful comment on an oversight, and we will be making a note in the next map issue about the high traffic streets, noting they may be less comfortable for some riders. For the same reason, we distinguished between types of routes on the map.
Jurisdiction: TransLink

Great Northern Way
As you noted, the slope connecting Clark Drive with the False Creek Flats is steep and a challenge for cyclists. One reason for providing a path on both sides of Great Northern Way between Clark and Glen Drives is to give cyclists more space and choice. The original vision for the CVG was to provide a bridge connection for non-motorized users between the False Creek Flats and Clark Drive at the top of the escarpment. Unfortunately the bridge was unable to proceed as part of the project because of cost and time constraints. As for the driveways, it would be worth letting the City know of your concern and experiences there.
Agency responsible: City of Vancouver

Safe cycling for everyone?

Your observation that the point of view of seniors and/or kids is key in assessing bike routes is very valid. It echoes the philosophy of Gil Penalosa of Bogotá, Columbia, who heads an organization called 8 to 80 Cities which urges leaders to …

“make decisions about our built environment based on what would be good for an 8 year old and an 80 year old which would result in great cities for all”.

Through TransLink’s Bicycle Working Group, a forum involving representatives from the municipalities in the region, there are active discussions and plans to advance standards for cycling facilities which suit a large segment of our population which is interested in cycling, but concerned.

We appreciate the time you have spent in creating this commentary and hope that understanding some of the context and forthcoming developments is helpful. It is important for the walking and cycling communities to focus their advocacy on projects which are important to them, and advance the realization of those projects realized. It took years of dreaming and planning to get the CVG to the present point. We consider it a work in progress.”

Thanks for this, Translink! Also, my thanks to Jhenifer at Translink’s Buzzer Blog for passing on the links to my posts to Translink Planning Department, and for bringing back this response.

Here’s Part 2 of my Guide to Cycling the Galloping Goose Trail!

And here’s my Guide to Cycling in Sooke!

Here’s my Guide to Cycling the wonderful Lockside Trail on Vancouver Island.

Here’s Part 1 of a whole series on the joys of cycling in Montreal.

Here’s a trail to avoid at costs in Richmond (unless you have nerves of steel and the cycling skills of a super hero).

Here are a whole lot of trails in the Lower Seymour Conservation Reserve – some of them challenging, some of them family-friendly.

Here’s an exceptional trail in Port Coquitlam, the Traboulay PoCo Trail – it offers a variety of terrains, distance without hills, a play park, a pub, and just generally fun for the whole family – even history buffs.

And here’s a post called Deer Lake Park: Cyclist’s Paradise for the Whole Family in the Heart of Burnaby.

Here you can read all about the Central Valley Greenway, an ambitious trail that runs from New Westminster to Vancouver, via Burnaby. And here’s even more about it.