You are here: Home / Cycling Reviews / Average Joe Cyclist Bike Trail Reviews / If a Bike Route is “temporary” for more than a year, is it actually “permanent”? Problems with the Central Valley Greenway
Pin
Share
Tweet

Problems with the Central Valley Greenway in Metro Vancouver 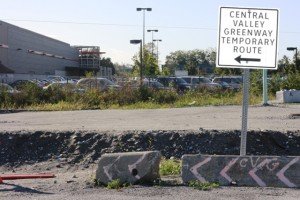 (Note: this is Part 2 of a 2 part series on the Central Valley Greenway. Here is Part 1. Also, here is a most excellent video of the entire CVG route, in fast-motion, from Alexwarrior.)

The Central Valley Greenway runs from the New Westminster Quay, via Burnaby, to Science World in Vancouver – a total distance of 24 km. It is marvelously ambitious; hinting at a wonderful future when commuting by bicycle could be easy and safe for a wide range of cyclists – from kids to seniors, and everyone in between. Unfortunately, it still has some major problems.

Part 1 of this series dealt with the New West to Burnaby section, the first 15 km. This post is about the part from Burnaby to Science World in Vancouver.

This video shows the entire CVG from Science World in Vancouver to the New Westminster Quay, speeded up 3 times.

I decided to test this stretch with two of my kids, aged almost-10 and 15. This was based on the fact that I have learned that assessing bike routes must be done from the point of view of kids and/or seniors, to see if they really provide safe cycling for everyone. It was an interesting experience, to say the least.

Once over the pedestrian bridge that spans the truck route/greenway known as Winston Street, the cyclist is in much safer terrain. It’s not paved, which is a problem for some cyclists with road bikes. However, it’s quiet and safe – hard to believe you’re just a few feet away from a railway line and Lougheed Highway. The photos below show two parallel stretches of territory, just west of Winston Street. 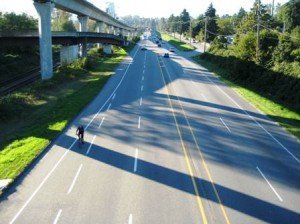 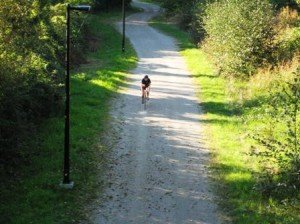 One of these is Lougheed Highway, with its bike lane. The other is of course a green part of the Central Valley Greenway. No prizes for guessing which stretch would qualify as safe cycling for everyone! And note that the Greenway even has lamp posts. Top Marks for the CVG here!

Unfortunately, this is short-lived. Soon the route pops you out onto Douglas Street (yet another truck route), where you need to travel about half a block on a narrow sidewalk, to reach a pedestrian crossing that gets you to Still Creek Avenue. We pushed our bikes along this bit. Not the end of the world, but not great either – in terms of safe cycling for all, this doesn’t quite cut it.

Even as an adult, I really hate the Still Creek bit. I would not have taken my kids on it if it wasn’t a Sunday. Every morning the so-called bike lane is clogged with idling semi’s. I have never seen any law enforcers trying to keep this lane clear for cyclists (nor enforcing the no-idling bylaw).

Worse, there are several spots where there is perpendicular parking. Many of the cars are parked facing outwards – but many are not. There are no signs to tell motorists to do so, even though cars reversing into a bike lane are insanely dangerous for cyclists. I was once almost hit by a young guy, reversing rapidly out with no reverse lights!

Then it gets worse. If you’ve survived the semi’s, the fumes, and the reversing cars, just past the Burnaby Recycling Depot you get to a part that has been signposted as “Temporary” since the Greenway opened last June.

Since June 2009, all that has happened in this section is that the “temporary” route has been shuffled around twice. In the meantime, large numbers of workers and heavy machines have re-arranged the dirt in various ways, to no apparent purpose. It reminds me of being a kid, using toy bulldozers to move dirt into interesting piles, but never actually building anything.

I have to ask, how long can something be marked “Temporary,” before we have to conclude that it’s actually “Permanent”?

UPDATE MAY 2015: The Terminator set has finally been removed, and it’s now immensely better – but not perfect. Here’s a video that shows the CVG from Costco to the Winston Street overpass, heading east, taken with my awesome GoPro Hero camcorder

At Costco you are out of the “temporary” construction zone and onto a broad sidewalk next to Stillcreek Avenue. That part’s just fine for the whole family. Then on to the best bit of all – a short off-road section, including a really well built bridge, and some whimsical “bike route art.”

Does anyone know who I can thank for this lovely bit?

After that there’s a little bit of broad sidewalk along Gilmore, and then miles and miles of off-road, paved trail that runs under the Skytrain. I really like this part, being able to speed along without worrying about cars. The only drawback is that if you are travelling with kids, you need to make frequent stops to dismount and get across major roads, including Boundary, Rupert, Renfrew, Nanaimo, Victoria, Commercial, and Clark. Some of these have no lights and are pretty dicey. The one at Clark does have lights, which is a good thing, as it’s pretty intense.

Then you’re off down a broad sidewalk next to Great Northern Way. The first bit is quite intimidatingly steep.

This part is more-or-less fine, except that there are several driveways into businesses, so there is a constant danger from cars going in and out. I have more than once come close to being hit by cars attempting to speed into one of these driveways. Perhaps it would help to have some signs to remind motorists that cyclists exist – or am I just a hopeless optimist?

UPDATE: Rob Syvertsen points out that it is probably safer to ride in the street than on the sidewalk here, despite the fact that the route is marked as being on the sidewalk. As he explains here, motorists expect fast-moving vehicles on the road, but not on the sidewalk. Lesson learned for me: trust your own gut, not the directions of well-intentioned but perhaps misguided route planners.

Then there’s a bit on-road on East First Avenue, but this part is always quiet. Then you cross over a really well constructed intersection with Main Street, and finally get onto a more-or-less separated bit on Terminal (which will be just fine when it’s completely separated). Then, of course, you have made it all the way to Science World.

Safe Cycling for Everyone?

By the time we got to Science World, my nerves were shot. I find this route very pleasant on my own, but with two kids in tow, it was exhausting due to the many difficult road crossings and the dangerous/unpleasant bits. I put up no protest when they said they were tired and wanted to go home by skytrain!

Bottom line: the Central Valley Greenway from Burnaby is very close to being a great bike route that would make cycling safe for everyone – but it’s not quite there yet.

UPDATE 2: It’s now almost 2 YEARS since I wrote this post, and the “temporary”  part of the CVG that goes past the Burnaby Recycling Depot is STILL just as AWFUL as ever – despite Translink’s plans and promises. In fact, it’s getting worse, with huge puddles that can literally drench a full grown rider. It’s time to call a spade a spade, and just put up a sign saying “PERMANENT ridiculously terrible part of the Central Valley Greenway – proceed at your own risk” …