Here is an entertaining account of the RBC Whistler Gran Fondo, written by local cycling enthusiast Alex Precosky. Thanks Alex for this great write-up – based on this account, I’ve decided to attempt this event one day!

Related: Are You Thinking of Doing a Charity Bike Ride?

“The Whistler Gran Fondo  is a large group bike ride from downtown Vancouver to Whistler village along the Sea-To-Sky highway, over a distance of just over 120 km, with 2,400 metres of climbing. Italian for “Big Ride”, the Whistler Gran Fondo is a large ride with thousands of participants, but is for a wide variety of skill levels. For example, although I have ridden a few 100 km+ rides around Vancouver and the Fraser Valley, I have never ridden in any kind of official road event, nor have I ridden on a cycling tour or camped overnight while riding. Many participants looked like seasoned road riders, but there were also casual people riding with just whatever bike they happened to own.

When I first heard about the Whistler Gran Fondo, I was very interested in signing up for it, but even though I ride to work every day, I wasn’t sure I was capable of climbing all of those hills over such a long distance. A friend I went to UBC with told me he had just registered, so I then signed up right away since I couldn’t let him do it and me not! This, plus the appeal of getting to do a scenic full-day ride without competing with fast moving traffic was just too good to pass up. It is lucky I signed up when I did, as the 4,000 registration spots filled up soon after.

Hotel deals were available for the event, as well as optional bus transportation back to Vancouver along with transportation for your bike, and I took advantage of all of these.

The bike I rode is a 2005 Devinci Amsterdam Disc, the same one I take to work every day. It’s basically a flat-bar road bike, but with a triple-ring crankset and disc brakes, and is light weight, and I have narrow road tires on it: 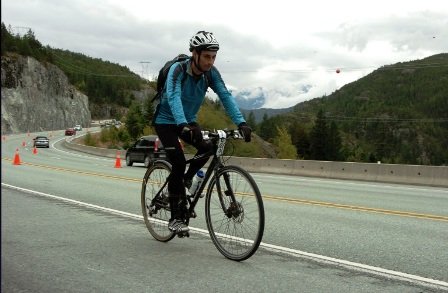 On Whistler Gran Fondo day, I left home at around 5 a.m. to get to the start area along Georgia Street in time for the 6:30 bag-check close and 7 a.m. start. It was a bit weird seeing the streets of Vancouver so empty. I saw almost no cars all the way to downtown until I got to the Burrard Bridge, and even then, only a few. For once, I rode on Burrard Street through downtown instead of taking the Hornby Street bike lane. Burrard was mostly empty of cars, but there were many people riding along it towards the Whistler Gran Fondostart line, and I arrived around 5:30.

I left my bag at the bag check, and entered the start chute to wait for the race to start. Marc Donnelly from the Vancouver Canucks games sang the national anthem, and Gordon Campbell addressed the crowd to wish us a good ride. As I rode past him I thought maybe to say “I paid HST on this bike!”, but instead I just smiled and waved, and he looked right at me and told me to “take care and ride safe!” Wow, words from Caesar!

Along the route, there were six aid stations set up with washrooms, mechanical help, food, water, and sports drink. There were also motorcycles patrolling to look for anyone needing mechanical help along the route. A lane was reserved for us for the entire way to Whistler. A few sections where there is only one lane per direction had sign people there to alternate traffic on the lane we were not occupying. It was great having the entire lane since it let us pass other riders safely, not worry about getting hit from behind, and go fast down the hills without having to worry about the rumble strips or debris on the shoulder. We also got priority at all intersections along the route, with sign people to make sure we had right of way.

The Whistler Gran Fondo rde went along Georgia Street, then through Stanley Park, and over the Lions’ Gate Bridge. It was great to get to go over the main part of the bridge for once! The ride then goes up, up, UP, the big hill on Taylor way. There were many people at the side of the road cheering everyone on, some of them with signs. At the top of the hill, a group of people had a big sign saying “Taylor Way, (checkmark)!”

We then entered on Highway 1/99, where we would stay for most of the the rest of the way! Just before the exit to the ferry turnoff however, someone motioned for everyone to slow down, and soon we found out why. We all saw someone lying on the road with paramedics and an ambulance near by. It turned out this was one of the first riders, a rider from Victoria who had a bad crash. There were plenty of rumors and ideas as to what happened floating around for the rest of the day. (See postscript.)

Along the Whistler Gran Fondo ride, although there is 2,400 metres of climbing, the net gain is only about 650 metres, so there is plenty of downhill as well. I was reaching speeds of around 70 km/hr on some of the downhills, but no doubt more experienced riders were reaching speeds faster than this! While riding, I was also scoping out the route for possible future trips along here.

I practiced crossing over the rumble strips on the shoulder a few times, and I found I could hit them as fast as 25 km/hr without feeling in danger, although I wouldn’t want to hit them going faster than that down a hill. The shoulder is marked with a bike lane stencil for most of the route to Whistler, and it was mostly adequate except for a short section a few hundred metres long near Furry Creek where there is just a tiny shoulder around a blind corner! Here’s a photo of it from the above dash-cam video of the route:

The second aid station at Porteau Road wasn’t right along the road, and required a slight detour and up a pretty big hill in order to visit. Many riders kept riding instead of stopping in, but I wanted to get the fullest experience from the ride, so up, up, up the hill I went to aid station 2.

Pasta and pizza lunch was served halfway through in Squamish (or Skwxwu7mesh, which I spent a long time memorizing how to spell so I could tweet it properly from my phone with this spelling of it once I got there!).

A few hours later, I finally crossed the finish line of the Whistler Gran Fondo. For fun, they had set up a digital “Your Speed” sign like the ones they use to help to control motor vehicle speed along the roads. I had taken it pretty easy most of the day, so I wasn’t that tired and I was able to sprint the last kilometer or so once I got close to the end; I remember the sign reading about 45 or so while crossing the finish.

At the finish line of the Whistler Gran Fondo, I was presented with a completion medallion, and they took my bike so it could be transported back to Vancouver for me. My cycle computer showed a ride-time of 6 hours 18 minutes, but that does not include time spent stopped at the aid stations. My final official time was just over 7 hours, which puts me in the bottom few percent of people that completed the ride unfortunately! That’s OK though, since it just gives me a large amount by which I can improve for next year! I stuck around the finish area for a while, where there was food and beverage available for purchase, along with live music, and awards were presented.

I had booked the night at the Aava Whistler, and I had to find my way there. Luckily there are maps of Whistler posted all around, so it wasn’t hard to find my way there. I had a good nap there, then walked around Whistler village for a while, eventually having dinner at a restaurant that I don’t remember the name of unfortunately!

It was a pretty great day. To participate, here are the costs I incurred:

Note that the transportation back, hotel, beer + food, are all optional and one could of course save by sharing a hotel room and eating less. There were also photographers along the route, and you could order a digital or physical copy of these for $50 or so for all of them, two of which I’ve shown above.

The overall experience of the Whistler Gran Fondo was definitely worth it, and I’ve already signed up for next year.

The registration fee for the Whistler Gran Fondo has gone up however to $225, and no doubt many people are upset by this, but for the sense of accomplishment provided by completing 2,400 metres of climbing along a 120 km route with great scenery and no competition with close-passing cars, I think it is worth it! Since the 2010 event was so popular, the 2011 event aims to be even larger with 6,000 participants.

In addition to the Whistler Gran Fondo 2011, there is also another GranFondo ride in the southern interior of BC planned for sometime during the 2011 summer, which I hope to sign up for as well!”

before buying from Amazon, because small commissions help pay for our time. BEST OF ALL – just SUBSCRIBE to our blog. It makes you part of our community, and gets you free weekly updates about our posts – as well as a FREE DOWNLOAD of our Bike Buyer’s Guide. Thanks in advance – reader support keeps us going and makes it all worthwhile!