You are here: Home / Bike Advocacy / Bike Events / Volunteering at the VACC Bike to Work Week – in the Tail of a Hurricane!
Pin
Share
Tweet

Yesterday morning I did my first ever shift as a volunteer for the Vancouver Area Cycling Coalition (VACC) Bike to Work Week. Yesterday morning also just happened to be the morning when a hurricane lashed its tail end across the Lower Mainland. Or so someone told me. And having been out cycling in it, I entirely believe it …

I set off in pitch dark and driving rain at 6.00 a.m. Within five minutes, my water resistant boots were wet through. This is always the case with water resistant things. I have come to believe that the term “water resistant” is short for “resistant to missing any opportunity to soak up water”.

Next I cycled through a minor flood on the “temporary” portion of the Central Valley Greenway. Wet and bedraggled, I arrived at Gilmore Skytrain Station, to find no one there. I felt like I’d been stood up on prom night. In the rain. Cold and wet, I huddled next to a Starbucks (I could see happy, warm, dry people inside, drinking  coffee). After consulting my faithful iPhone, I figured out I was in the wrong location. Off by a block. No surprises there, given the way the morning was going. 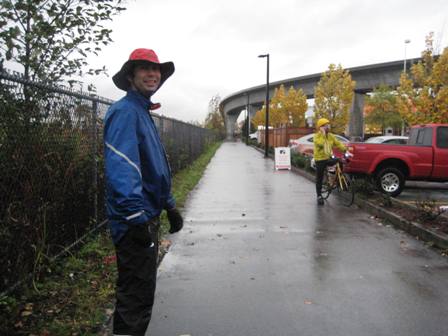 After that though, things improved. I found the intrepid group of VACC volunteers, huddled under two tents kindly supplied by Norco, in the parking lot of the Home Depot. They were friendly, and they gave me coffee. And although it wasn’t nearly as warm and dry as Starbucks, the conversation and company were way more interesting. I almost forgot that my feet were soaked and frozen.

To my amazement, a constant stream of soggy but well-lit-up bike commuters went by on the Central Valley Greenway, despite the utterly foul weather. Encouraged by Sylvain who enthusiastically danced around on the trail and yelled a lot, many of them stopped.

Some had coffee and snacks, most entered the competition to win Ethical Beans Coffee, and some got a quick bike repair (again kindly supplied by the guys from Norco). 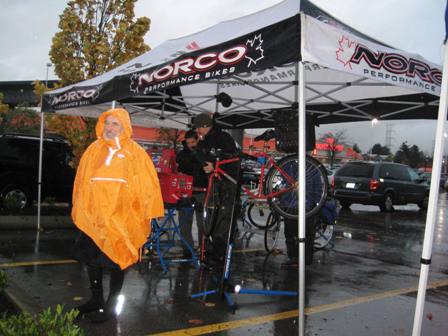 Just as I was starting to relax and wander around taking photos, Logan yelled for help because the tent was about to blow away – that darn hurricane tail again. Grateful that I am still pretty heavy, I held down the tent while Logan fetched concrete blocks to anchor it. We debated whether the decorative banners proclaiming Bike to Work Week were about to turn into sails and send the entire tent into the stratosphere. In the end, in the fearless tradition of people who voluntarily cycle in hurricanes, we decided to take our chances – and the tents stayed up.

Although I only managed to show up at 6.30 a.m., this group of volunteers had been out in the freezing cold and rain since 5.30 a.m. I take my hat off to all of them, and to the effort they are making to improve cycling conditions for all of us. Even if you cannot get out there and work at a station, there’s still time to register for Bike to Work Week and support the VACC’s lobbying efforts – just by riding to work!