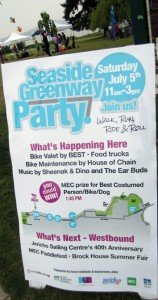 The event was jointly organized by Vancouver’s HUB, the Vancouver Public Space Network, and neighbors of the area. It included music and food carts at Mill House Park.

The map below shows this new segment of Vancouver’s cycling infrastructure.

This great new route connects Vancouver’s Seawall and False Creek with Jericho Beach. The Seaside Greenway is partly bikes-only, and partly a transformed Point Grey Road, now one-way only, as well as local traffic only. 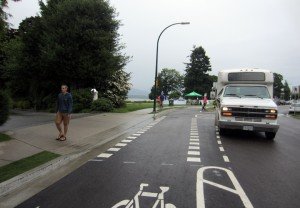 I am sure this route now rates a AAA (All Ages & Abiities). A lot of children participated.

It was awesome to see very young children cycling in safety. Of course, it’s not yet common in Canada. I saw one little girl biking with her mother and looking quite confused. I heard her saying to her mother, “This is a ROAD for BIKES? Really?”

Here’s a very brief video of this family-friendly Seaside Greenway route, with the opening party in the background.

The opening party was at Mill House Park. We got some great takeout from the Nacho Average food cart . 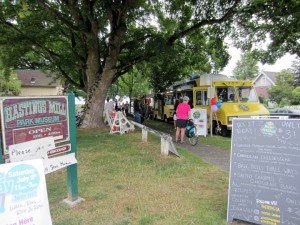 The park houses Mill House, which is the oldest house in Vancouver, and is now a museum (entry by donation). 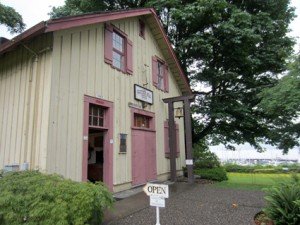 The numbers would no doubt have been ten times better if it had not rained the entire day. But people rallied to the occasion in true Vancouver style, with tarps on the ground and colorful umbrellas over their heads.

All in all, it was a great event and a great ride. I am so happy to see Vancouver’s cycling infrastructure improving so rapidly.

Thanks to Vancouver’s HUB, the Vancouver Public Space Network, and neighbors of the area for organizing this fun event!