Recently I was more than a little annoyed by a Toronto bike blog. The offending words:

“Unlike the dull, grey cycling monocultures of Portland and Vancouver, where the ‘old guard’ is very much in effect, Toronto’s bike culture is as socio-economically varied and multicultural as the city itself.” 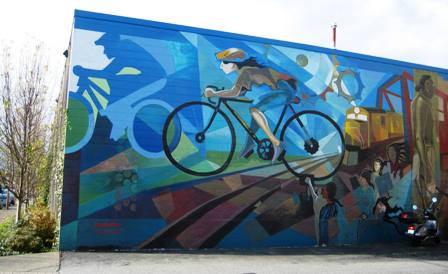 This coming from someone living in a city that has just elected Mayor Rob Ford by a landslide, struck me as a little rich. I have to admit I got annoyed enough to bark out a comment – something I usually avoid, because I think everyone has a right to their opinion (no matter how wrong it may happen to be).

Still, it set me to thinking about Vancouver’s cycling culture. I experience it as marvellously diverse and vibrant, ranging from the borderline anarchic (such as a few of the participants in Critical Mass) to the utterly staid (such as me), with all manner of fun things in between: bike polo, Bike to Work Week, bike messengers, electric bikers, bike patrollers, a mayor on a bike, strong activism, North Shore mountain bikers, and interesting T-shirts! 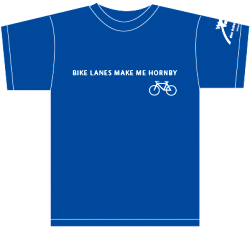 It occurred to me it would be hugely fun to publish a (probably pretty long) blog post with photos illustrating the rich and fun diversity of Vancouver’s cycling culture. Unfortunately, I do not personally have enough such photographs.

So this is an appeal to please help me show that Vancouver’s Cycling Culture is anything but dull, grey and monochromatic.

Not because we care what some blogger in Toronto thinks; but because we want to celebrate ourselves!

So if you have any photos that show off our cycling culture that you are willing to share, please send them to me, telling me what you want the caption and credit line to be. I hope to gather enough to do a really fun post! If it turns out as well as I hope, I will save it as a separate page, so it will become a permanent record of our amazing cycling culture.

Update: Here is my post about Vancouver’s VIBRANT cycling culture!