Undaunted by Monday’s volunteering stint at a VACC Bike to Work Week Station in a torrential downpour, I set off yesterday afternoon to help out at a station near Metrotown. It was a great experience – and this time I was able to help out a little. 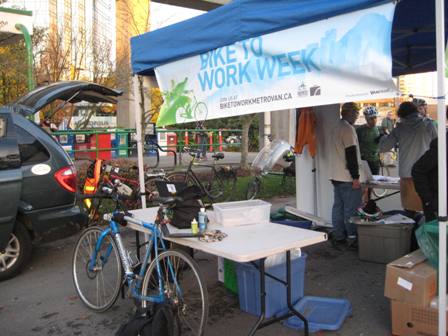 In typical Vancouver fashion, Monday’s “hurricane” was followed by a perfect Fall day, gloriously sunny. I easily found the station, on the BC Parkway. Lisa, a dedicated volunteer, was busily helping cyclists to enter the daily competition, select free bike route maps, and join the VACC. 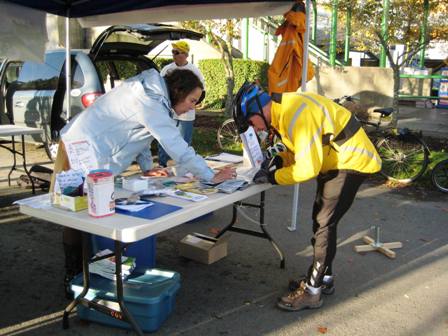 A lot of cyclists were enticed to stop by the smell of the coffee kindly donated by Starbucks. (Apparently both Starbucks and Ethical Beans Coffee are generous and loyal supporters of Bike to Work Week.) In fact there were so many cyclists stopping that I was hard pressed to do my allotted job: counting cyclists. I was pleasantly surprised to see that more than half of the many cyclists stopped.

The number of cyclists has been steadily growing, and this growth helps the VACC in its lobbying efforts. In May 2007 there were 2,778 VACC Bike to Work Week cyclists, and by May of this year the number had grown to 7,285. 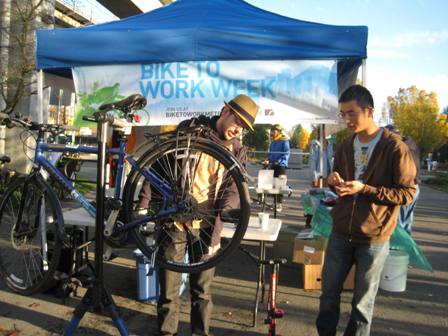 Another attraction for passing cyclists was free bicycle repair, this time offered by Logan. Another very hard-working volunteer, Logan is helping out at VACC Bike to Work Week Stations twice a day, every day – wow! Here he helps Eric understand the mysteries of disk brakes.

This was my first time helping out at the VACC’s Bike to Work Week, but it won’t be my last. It was a lot of fun hanging out with fellow cycling enthusiasts, and meeting other bicycle commuters.

It’s not too late to register for the VACC Bike to Work Week and support the VACC’s lobbying efforts – just by riding to work!