You are here: Home / Bike Advocacy / 7-Year-Old Boy on Bike Run Over by Cab Should Have Been More Careful!
Pin
Share
Tweet

Picture this: seven-year-old Ronan Williams gets a red bike for his birthday. He’s riding it on a sidewalk right outside his own home. A cab driver has been parked half on the sidewalk and suddenly pulls off, clipping Ronan’s bike and sending the little boy flying. The cab driver flees, leaving the crying boy lying half in the road and half on the sidewalk, his new bike on top of him. 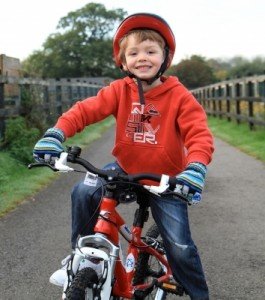 The good news is that Ronan was not badly hurt. Although Ronan’s mum says he’s now having nightmares and is afraid to ride his broken bike again.

But here’s the really sick part. The story is published in the Edinburgh Evening News. Within twenty-four hours there are ninety-four comments on the story – and many of them blame the little boy! Here are some of the most disgusting comments:

“… let this be a lesson to the older cyclists who use their bike on the pavement rather than the road where they should be.”

“I thought it is illegal to cycle on the footway unless it is a designated cyclepath?”

“I wonder if the whole area would be in uproar if this boy had struck and injured an OAP (old age pensioner) whilst cycling on the pavement.”

“Has the child looked where he was going before going on his bike?”

To be fair, some of the posts were more humane. In fact, one of them nails it, in my opinion, when he says:

“There’s a thin line between cynicism and unreasonableness, and several people are way on the wrong side of it here. When your immediate reaction to a child injured by a motor vehicle is to suggest reasons why the child might be blamed and the driver exonerated, you need to take a good look at yourself.”

Indeed. We do need to take a good look at ourselves. What is wrong with human beings that so many of us will take the side of an anonymous motorist who flees the scene, rather than the side of an injured child?

Despite this laudable anti-corporate action, my theory is that our economies depend so heavily on our unhealthy love affair with motor vehicles that many people are no longer able to think straight. We cannot face the reality that we are in love with a monster that injures, maims and kills our cyclists, our motorists, our pedestrians, and – most tragically of all – our children.

And believe me, it does kill our children. We lament the young people killed in wars, but most of us accept without question or protest the slaughter of our children by motor vehicles. I personally know a mother who was pushing her baby girl in a stroller when a car ran a red light and hit the stroller, decapitating her infant. Many other children have been killed on sidewalks by cars rushing to get a parking spot! My own brother died very young when he was killed by the driver of an enormous vehicle who didn’t bother to yield to a motorcyclist, even though my brother clearly had the right of way. Might is right, right? (Note I am not mentioning the type of enormous vehicle, because last time I did that I inadvertently offended thousands of people and bought enormous fury down upon my head. Suffice it to say it was enormous, motorized, and had more than ten wheels.)

And of course, children are routinely mown down by drunk drivers, such as four-year-old Alexa Middelaer who was killed by drunk driver Carol Berner in 2008, while the little girl was feeding a horse at the edge of a quiet street in Delta.

It is not only children and cyclists who are mown down by cars, of course. Cars kill without discrimination. So much so that more than twice as many people have been killed by cars in the USA since 1900, than have been killed in all the wars in US history. And cars kill more people than terrorists could ever hope to kill – the carnage of cars makes 9/11 look like a minor detail:

Since cars were first invented, they have killed a staggering 30 million people – equivalent to TEN THOUSAND 9/11’s!

As I write, cars are still killing half a million people every year. During the time that a one-minute ad for cars runs on TV, at least 31 more lives are destroyed by car accidents. All this while more than half of the people living in North  America live within 8 km (5 miles) of their work place, and could easily bike (or even walk) to work!

If any other machine caused this kind of horrific slaughter, we would demand that it be banned.

And so when a little boy is injured by a hit-and-run car driver while cycling on the sidewalk outside his house, there is no shortage of good citizens stepping up to blame the little boy on his bike. After all, motorists cannot possibly be in the wrong, so it MUST be the little boy’s fault!

By simply clicking on one of the Amazon links

before buying from Amazon; or on one of the links for Jensen USA, Competitive Cyclist or REI. Small commissions help pay for our time. It costs you nothing at all except a click. Or, if you are planning a vacation, please book your hotel by first clicking here for HotelTravel.com. Or SHARE this post (using the Share buttons) or LIKE our Facebook page. BEST OF ALL – just SUBSCRIBE to our blog (click on the link below, next to Mrs. Average Joe Cyclist’s smiling face). It makes you part of our community, gives you a free download of our Bike Buyer’s Guide, and gets you free weekly updates about our posts. Thanks in advance – reader support keeps us going and makes it all worthwhile!