You are here: Home / Bike Commuting / Benefits of being a Bike Commuter / The MOST Dangerous Place in the Province for You to be may be Your Own car – Traffic Accidents in BC
Pin
Share
Tweet

Global TV has released startling news about traffic accidents and fatalities in the Lower Mainland.

On Monday, Global News led with a story that dozens of new, digital cameras will be installed to catch drivers running red lights in BC. The planned numbers are as follows:

There may also be a lot more traffic cops on the streets soon. This is good news for law-abiding drivers – but it’s just more bad news for the other 90% of motorists! In case you think I’m exaggerating, Global noted that when speed traps are put up, MOST drivers are found to be going at least 20 km over the limit. Isn’t that reassuring for cyclists sharing streets with them? No wonder there are so many traffic accidents.

Global fired off an avalanche of chilling statistics:

“The most dangerous place in the province for you to be may be your own car. Over a 4 year period (2004 – 2008) there was an average of 270,000 (that’s more than a quarter million) crashes per year on BC roads. 76,000 people were hurt, and 515 killed. There are more deaths every year on Lower Mainland roads than people killed in homicides, including gang-related deaths in all of BC.” 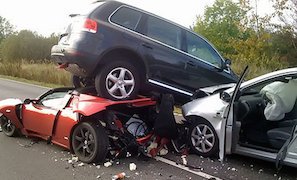 Does this mean I should encourage my teenagers to join a gang rather than buy them cars, because they’d be safer? Mmm. Although now that I stop to think about it, owning a car seems to be a prerequisite for belonging to a gang. I do not think this because I’ve applied to join a gang, and been declined on the basis of my bike habit. It’s just that I’ve noticed that local gangsters are always getting shot in their cars, or else shooting people from their cars. I have yet to read of a gang member being shot by a peloton of gangsters cycling past, or of a gang member being shot while on his morning bike commute. Darn. There goes that option for my kids.

In any event, just in case the stats did not encourage you to put your car on Craigslist, Global clinched the argument with a discussion about traffic fatalities (a euphemism for people killed in horrible ways in traffic accidents). They spoke to Solicitor General Rich Coleman about his experiences when he was a Mountie. Looking haunted, Coleman stated that he “saw some pretty nasty fatalities … you don’t forget those things.” Cut to shots of up-side-down smashed-up cars, with what appeared to be covered-up bodies next to them.

Finally, Global tried to make the argument for more traffic cops in BC by highlighting how much worse the stats for traffic accidents are in the Lower Mainland than in other provinces:

I applaud Global TV for shining a spotlight on the dark under-belly of our global car obsession.

I think this kind of focus on traffic accidents, injuries and deaths could do more to persuade people to stay out of cars than years of preaching about the environment.