You are here: Home / Bike Commuting / Bike Safety / Sea to River Bike Route in Burnaby – If a Bike Route is full of Cars, is it Still a Bike Route?
Pin
Share
Tweet

The bike route from North to South in Burnaby is poetically named the Sea to River Bike Route. I could suggest a lot of other names. “Death-defying route” springs to mind. As does “Suicide Run bike trail.” And “Are you Kidding Me?”

Let me take you through my morning commute, along the Sea to River Bike Route.

The first part of my route is heading west along the mostly-fabulous Central Valley Greenway (CVG). Apart from the dodgy bit on Stillcreek Avenue, this part is heavenly. The exercise endorphins kick in and I start to sing loudly and discordantly.

Then I hit Gilmore.

There is, in short, no safe way to switch from the Central Valley Greenway to the Sea to River bike route,  no matter which way you are going.

If this was Montréal, someone would have figured it out, and all kinds of steps would have been taken to make the Sea to River bike route safe: signs, painted directions on the road, etc. But sadly, it’s Burnaby, and cyclists have no option but to wing it, thereby putting themselves in danger. And because there is no signage, motorists are often surprised when cyclists suddenly hop onto, or off, the sidewalk. As any cyclist will tell you, it is NOT a good idea to surprise motorists.

The Scariest Part of Gilmore

From that point, it’s all uphill – literally and figuratively. Heading south on Gilmore, the traffic gets worse the higher you go. There is no designated bike lane, so you have to settle for what is laughingly referred to as “shared lanes” – aka “cyclists beware, because everyone sharing the lane with you is faster and MUCH bigger than you.”

By the time you get to the intersection of Gilmore and Canada Way, the Sea to River bike route has assumed the nightmarish dimensions shown in the photo at the beginning of this post. Bikes are squashed in between buses and cars, in too-narrow lanes, and it’s really, really dangerous. The only solution to make this route safe for cyclists would be a physically separated bike lane.

After this Sea to River bike route improves, as one can ride off-road from Canada Way to Kincaid. Even there, there are issues: you’re on a sidewalk, shared with pedestrians and people lining up for buses – and worst of all, motorists zooming in and out of car parks, apparently blissfully unaware that they are crossing over a bike route. Some signs might help them remember.

After that, the roads are quieter. But it would still be WAY better if there were – at the very least – painted bike lanes. After all, the Sea to River bike route is one of the only two north-south connectors for bikes in Burnaby – would it be too much to ask for just ONE lane? I can attest to the fact that there are many, many cyclists on this route – pretty impressive, given how scary it is.

Just past Kingsway, things are looking good, as one cycles along a quiet road (Patterson) – but then suddenly, a short way after Patterson Skytrain, the entire route is simply blocked off.

The route has been blocked off completely like this for MONTHS. What used to be my route to work, now looks like this:

What drives me crazy about this is the complete, total, utter lack of consideration for the fact that this is the only safe way for hundreds of cyclists to get to and from work.

Imagine if they completely closed off Highway 1, without warning, without explanation, without telling motorists when it would open again, and without making provision for an alternative route!

Governments would fall, heads would roll – but they can treat cyclists like just so much irrelevant garbage, like we’re not even people, let alone tax-payers, and completely get away with it. Deep yoga breaths …

Back to my commute. I scoot around this impediment, on the sidewalk because there’s no alternative, carefully dodging strollers and seniors, and get to calmer waters. It’s smooth sailing along Maywood and McKay, which are quiet streets.

But here’s the kicker: at the foot of the intimidatingly steep McKay, the Sea to River bike route simply … STOPS.

Hello, City of Burnaby, news flash: there is NO RIVER at the foot of McKay. There’s a dead end. So why is it called Sea to River bike route? Shouldn’t it be “Sea to Dead End in the Middle of Nowhere Route?”

At this point, I am just one tantalizing kilometer away from the next major bike route, Kent. I am also a slightly shorter distance from my workplace on North Fraser Way.

Another news flash for the City of Burnaby: there are hundreds of cyclists working in the new industrial complex on North Fraser Way. Would it be too much to ask that you provide us with a safe way to get to work – especially given that transit options to this area are very limited?

In any event, after the Sea to River bike route simply ends, I wend my way through a tortuous route that includes alley-ways and a narrow, unlit forest crossing (fun in summer, but scary in the icy dark of winter, especially now that homeless people have moved in).

Once I am safely through the forest, I cross a steep, narrow pedestrian bridge with limited visibility and low railings. This is the only relatively safe way for cyclists to reach the river, but it’s really not safe enough. I have no idea if this is legal, but given the total lack of guidance or interest from the city of Burnaby, I just hope for the best.

At the other side of the pedestrian bridge you get to choose between a hairpin U-turn, or another forest foray. If you choose the forest (again unlit and narrow, and also featuring an elevated train track crossing), the city has erected an interesting agility test: a turnstile just half a meter away from a bog. 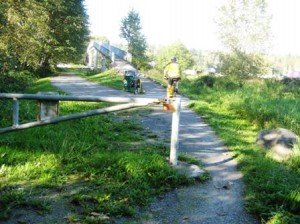 Sad to say, Maggie (Mrs. Average Joe Cyclist) failed this test on her first commute on the Sea to River bike route. Her pannier clipped the turnstile, causing her bike to stop suddenly, while she sailed gracefully over the handle bars and hit the paving. Miraculously, she escaped relatively unscathed, albeit severely shaken up. If she’d been badly hurt, I’d be even angrier than I already am …

The last bit of my route to work is on Sea to River bike route is on Glenlyon Parkway and North Fraser Way, two very broad roads that for reasons unknown have no bike lanes. How is it possible, in this day and age, that new industrial areas can be developed without so much as a thought for the existence of cyclists?

Come on, City of Burnaby … surely you can do better than this?

POSTSCRIPT:
Here is the City of Burnaby’s response about the Sea to River Bike Route.

On a more positive note: here are some posts about trails that really ARE cycling trails.

To support this blog, please consider clicking on one of the Amazon links before buying from Amazon. A small commission from Amazon helps pay for our time. It costs you nothing at all except a click. For more information, please see “How Our Affiliate Links Work” in the right-hand side bar (down below if you’re on a mobile) or our Policies page.
If you don’t want to buy anything, fair enough – but please consider supporting this blog by SHARING this post (using the Share buttons below) or by LIKING our Facebook page. BEST OF ALL – just SUBSCRIBE to our blog (click on the link below, next to Mrs. Average Joe Cyclist’s lovely face). It makes you part of our community, and makes sure you get free updates about all our posts, once a week. Thanks in advance – reader support keeps us going and makes it all worthwhile!