There are so many things wrong with the MotoComm Ridercam 30F, it’s hard to know where to start. So I thought I’d start with what’s right with it.

Related: World’s Toughest (and Most Affordable) Helmet Cam – GoPro Hero Review and the Video it took as it Fell 10 Stories

The Good Aspects of the Ridercam 30F 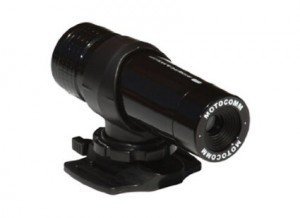 The camera comes with a range of mount options, including helmet and handlebars. There are so many of these bits and pieces, I’m not even sure what they’re all for. And it comes with a useful little bag to hold all the bits and pieces. (Unfortunately the bag looks and feels cheap, but it is still a bag.)

Finally, as you would expect with a helmet cam, it’s small and very light. Also black and shiny and pretty good looking.

That’s about it for what I actually like about this camera.

The Bad Aspects of the Ridercam 30F

In short, I have taken far better videos with my little Canon SureShot that I bought for $60 off Craigslist.

So why all the problems with angles? Simple: I discovered that once you mount the camera, it is almost physically impossible to UN-mount it, unless you have the strength of Shrek. So I elected to just leave it permanently attached to my old helmet. This was a mistake, because on the helmet, you have absolutely no way of telling what angle your camera is at until you download the footage and find yourself staring at endless views of undulating pavement – and nothing else. Or find that the world appears to have turned sideways.

Apart from the depressingly awful footage, the Ridercam 30F also has these problems:

Bottom Line on the Ridercam 30F

A helmet cam without an LCD viewing screen is worse than useless … after I return this horror to the Source I will shell out the extra money for a camera that includes this feature.  I replaced it with the V.I.O. POV 1.5, which is a much better helmet cam (I reviewed it here). I used it to make the video below of the Stanley Park Seawall.