You are here: Home / Bike Advocacy / #ReplaceBikewithCar – There was a Time when we DID replace Bike with Car
Pin
Share
Tweet

The current fear and hatred of cyclists was parodied by the hilarious #ReplaceBikewithCar Twitter campaign. The idea was to show the ludicrousness of anti-bike rhetoric by replacing “bike” with “car.” For example:

Our sensible ancestors rightly feared the presence of cars in cities. #ReplaceBikewithCar https://t.co/TUnl2k3WM4 via @AvrgeJoeCyclist

This campaign highlighted the craziness of some of the anti-cycling statements. But what most people don’t realize is that just over a hundred years ago, most road-users hated motorists just as much as many motorists today hate cyclists. A century ago, bikes WERE in fact replaced by cars in the frightened, angry rhetoric of most road users.


Yes, really – not so long ago, almost all sensible people were afraid of cars. In the early 20th century, cars were seen as dangerous menaces, a threat to civilized means of transport, like walking, biking, and horse-drawn carriages. Today, most people seem to see people on bikes as dangerous, while thinking of cars as a sensible means of transport.

It’s  fascinating to look back to the arrival of motors cars, and see how  people resisted cars as fiercely as some people now resist bikes.


Cars were first invented in 1885, but it took decades before they became a threat to pedestrians, horses and cyclists. As late as 1907 they still were seen as irrelevant, annoying, noisy, smelly nuisances. The editor of the New Glasgow Eastern Chronicle wrote:

“The automobile fever is catching.  [Soon] … the chug-chug noise will be quite common. … The horsemen need not get alarmed that the motor car will injure their business in our country.”
(New Glasgow Eastern Chronicle, 19 April 1907)

Good thing this guy was in newspapers, not investment advice!

As cars became more common, hatred of cars increased – and so did fear of cars. (Amazing how much this sounds like what is happening today with bikes.) A newspaper correspondent called cars the “running stinkers,” saying he was “one who doesn’t own an auto – but one who is likely to get run over.” As cars continued to terrorize other road users and fear grew, moralists came out in force. In just the same way as motorists are now preaching to cyclists, the Chronicle editor warned:

“The auto people have the right to use the public roads, but they must do so in a reasonable manner.  If they go rushing about the country regardless of whom they may annoy or injure they can be hauled up with a round turn, but as long as they are careful and regulate to statutory speed their right is undeniable.”

“There surely should be some legislation for the people who maintain the roads and who in their daily avocation are constantly called on to use these roads.  Their rights should be protected against these life endangering pleasure jaunters.”

The fear of cars a century ago was very sensible. Their noisy engines and horns on formerly peaceful country roads terrified both horses and humans. One correspondent admitted that he was:

… “(in) mortal terror of one of these devil wagons meeting us when we are driving along the road, our horse taking the nearest fence and leaving us stranded on the roadside, possibly maimed for life, and our good looks considerably out of joint.”

Legislation was enacted to defend the fearful horse-riding majority against the motorized encroachers:

Just as today’s short-sighted business owners (irrationally) fear losing trade because of bike lanes, back in the early 20th century business men were afraid of the newfangled “stink wagons” – also referred to as “gasoline devils” and “devil wagons.” The editor of the New Glasgow wrote:

“… we feel fairly certain that besides the danger and injury inflicted, these `devil wagons’ will lose the merchants of the town thousands of dollars worth of trade, because the country people will not, and justly so, risk their lives, coming or going from town, by meeting one of these machines.”

The notion of people being afraid to go downtown for fear of meeting a car seems ludicrous today – but perhaps our ancestors were more sensible than we, given that on average, 12 pedestrians and 2 cyclists are killed every single day by cars in the USA? (That’s 14 devastated families every.single.day, because a loved one has been violently smashed to death by a motor car.) (2014 stats) And let’s not forget that if you are under the age of 29 and reside on the North American continent, the most likely thing to kill you is not illness or terrorism or drugs or a crazed shooter – no, the most likely thing to kill you is something that advertising has been teaching you to love and revere your entire life … cars. Yet quite bizarrely, pedestrians have entirely gotten over their perfectly rational dread of cars – instead, business owners fear that their customers will be too lazy to walk a couple of blocks after parking their cars, due to the removal of a few dozen parking spaces to accommodate  new bike lanes. See for example the raging debate about bikes lanes on Vancouver’s Hornby, Dunsmuir and Union Streets!

Opponents of the “stink wagons” used an argument similar to that used today against cyclists, equating horse riders with sensible business people and car drivers with frivolous layabouts:

Interesting that the horse-riding majority was claiming to have built the roads by and for themselves, and resented the new car drivers (falsely claiming motorists had not contributed to the building of the roads). This is exactly like many cyclophobes today, who allege that roads are paid for solely by people who happen to drive cars (and falsely claiming that frivolous cyclists do not own property or pay taxes, and therefore have no right to use the roads!).

As we know, people did eventually accept motor cars. However, it did not happen overnight – in fact, it would take DECADES before cars were accepted and adopted in large numbers. I am optimistic that people will be a little quicker to accept the positive changes associated with increased cycling, especially given  the increasingly irrefutable proof of global warming, constantly rising obesity and “lifestyle” diseases, and of course, ever-higher gas prices. 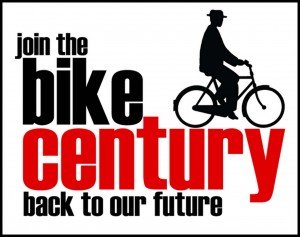 Not so long ago, adults on bikes might be laughed at, pitied or simply ignored. Now there are many more of us, and motorists have stopped ignoring us – and stopped laughing. Cyclists are now at the stage of being fought with, but inevitably, we will win. Our city planners are well aware that cities such as Vancouver cannot be sustainable in the future unless viable alternatives to cars are embraced. Be it ever so glacial, change is nonetheless inevitable.