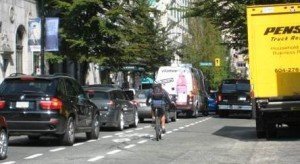 BUT if you’ve been reading the newspapers lately, you could be forgiven for thinking that everyone in Vancouver bitterly opposes the notion of a separated bike lane on Hornby. You might have thought that, like the business people in the area, Vancouverites would rather see dead cyclists than risk a dip in business profits. The picture shows how dangerous it is to bike on Hornby Street.

However, safe bike lanes tend to BOOST business in the area.

But on the contrary, the Vancouver Sun reports that the results of a poll on the proposed Hornby Street separated bike lane are in – and they show that most Vancouverites support it!  The Mustel Group conducted a survey of 500 people in the area, and found that 56% were in favour, with only 30% opposed; 14% were undecided. Not only that, it showed that 75% of those polled support the idea of a separated bike lane linking east and west Vancouver – including 56% of motorists! In addition, 45% of respondents would use the proposed separated bike lane.

Perhaps the most interesting finding was that people were more likely to be opposed to the separated bike lane if they already knew about the issue. Just ask yourself, how would they know about the issue? Most likely, via the media. And whose views have the media tended to promote? Why, those of that vociferous minority of self-centred business people, led by Laura Jones and the Canadian Federation of Independent Business, who would rather let cyclists continue to risk death on Hornby, than lose a few parking spots in front of their businesses!

This vocal minority has had so much press coverage, that it seems to have fostered a negative impression about the bike lane in some people’s minds. However, approaching the matter with an untainted mind, it’s a no-brainer. Just ONE lane, that’s all it is. And it will make biking possible for average people, and safer for all.

With the result that cycling will surely increase, while car driving decreases – so there will be less vehicular traffic, and therefore life will IMPROVE for motorists and cyclists alike (motorists will have fewer traffic jams to contend with; cyclists will have fewer cars around to potentially kill them).

I love a win-win! And I am delighted that the majority of Vancouverites polled agree!