A couple of weeks ago I went to the Pan Pacific’s 25th Annual Christmas Wish Breakfast in Vancouver. This is a great tradition, which enables people to donate a (new) toy to the Christmas Bureau, and then share a communal breakfast. The Christmas Bureau passes on the toys to families that are struggling to afford gifts for their kids.

It’s the first time I’ve ever gone, and I was amazed at the number of people eager to donate – it was literally the longest line up I have ever been in. (Apparently nearly 5,000 people donated more than 13 tonnes of toys and $26,000 in cash – makes me even prouder to be a Vancouverite!) There was a great Christmas spirit about it, and next year I plan to take my kids along to share that feeling of giving instead of just taking at Christmas. 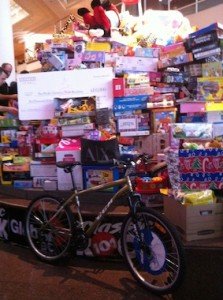 But what really blew me away was the generosity of some of the people – most especially, those who arrived wheeling shiny new kid’s bicycles.

It took me back to my own childhood. Without a doubt, my best Christmas gift ever was the shiny red bike I got when I was about ten years old. It was one of those  iconic Chopper bikes, designed by Alan Oakley, who died in May this year.

Although challenging to ride, it was red, it was shiny, it was a BIKE, and it was MINE.

That Chopper bike shone with the promise of joyful bike rides, and it lived up to the promise. I remember hurtling down steep bush paths on that Chopper, my little brown dog racing behind me – moments that still stand out in my memory as some of the most joyful and exhilarating of my entire childhood.

So my Christmas wish is that every kid who wants a bike this Christmas gets one, and gets just as much joy out of it as I did. And I have resolved that next year, I will be one of those generous people who donate a bike, so that there’s one more kid who gets a bike.

In the meantime, I wanted to say Merry Christmas to you all, and to wish you a year of safe, fun cycling in 2013.