Here’s an update about being a brand new bike commuter! My first post about becoming a bike commuter is here. 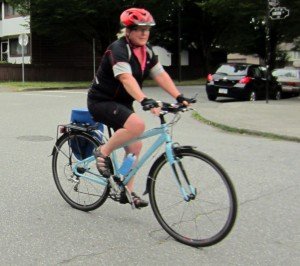 So here it is the end of week three of my bike commuting and I’m still stoked.  I look forward to both of my bike rides each day.  In the morning it is cool and quiet.  Such a nice way to start the day!  In the evening it has been quite a bit warmer but when you are riding there is always a breeze so I haven’t felt overheated.  I also have the satisfaction of passing traffic that is either slow moving or not moving at all.  I feel like I’m giving them all the “wheel” as I pass by.

Being a bike commuter is so much better than a hot, stuffy commuter train! 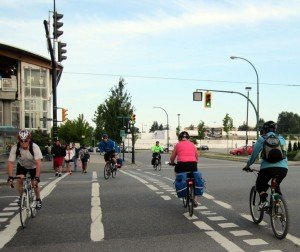 After two weeks I traded in my electric bike for my road bike.  The electric bike was heavier but I had a throttle to help me up hills.  The road bike is much lighter but  has no throttle so when I’m on a hill, it’s all me.  My commuting route is nicely challenging without being impossible. It is about 30 km round trip and takes me about an hour door to door each way. My biggest accomplishment is the hills, and there are a few of them that are challenging.

I’ve learned to concentrate on my breathing as I’m increasing my exertion and most of all to relax … relax … relax. I tell myself that this hill isn’t going on forever so don’t panic.

I think that is the hardest thing for people to grasp as they start exercising.  You are going to feel out of breath, but if you panic you make it worse. Relaxation is the key.

I also monitor how I’m improving as a bike commuter every day.  What gear did I use yesterday, was it a higher gear I’m using today?  Okay, I really am a cycling geek – but I live with a bike commuter so I guess it’s rubbing off.

Of course I have a few aches and pains – my fingers and my legs mostly – surprisingly, not my butt.  Those bike seats only LOOK small, they really do support. But it is important to remember that there are good hurts and bad hurts.  A good hurt is the fatigue you feel after a good workout, when you know you have pushed yourself but you will recover.

But now the best news; I have had high blood pressure for years, and even when I was running 5 km three times a week it was still high.

I took my blood pressure last week and for the first time in years it was in the normal range. 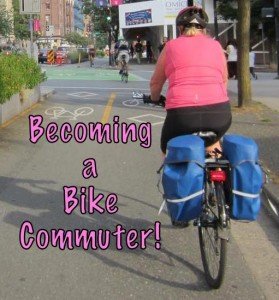 Usually the best readings I have are in the caution zone and then even slightly higher in the doctor’s office.  This is huge!  So what’s the difference?  I loved running but it was very hard on my body – cycling isn’t. Instead of a 35 minute run three times a week I’m getting 120 minutes of cardio three times a week, thanks to being a bike commuter.  All this without the stress of the wear and tear on my joints.