It’s just too easy to get stressed out about road rage – especially the kind that’s directed towards vulnerable cyclists by angry bullies protected by two tons of steel. But all this stress is just as harmful to my health as sitting in a gridlocked car for two hours a day would be – which kind of defeats the whole purpose of cycling for health.

So I thought I’d do a light-hearted post and pass on some hilarious links I have been given. 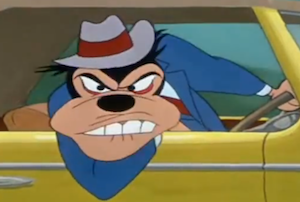 Road rage seems to have arrived when the first driver got into the first car – and presumably felt powerful enough to treat his fellow human beings with fury if they slowed him down.

In 1895, speed limits were four miles per hour! Cars were still in the minority on the roads, beginning a fight for dominance that they would eventually win (sadly). At that time, before we all went into mass denial, people understood how dangerous cars could be. So all cars had to have a man walking in front of them, carrying a red flag or a lamp, to warn pedestrians, cyclists and horse riders of the approach of a dangerous vehicle that could potentially kill them. 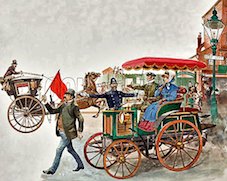 That law did not save Bridget Driscoll, run over by a car in 1896, aged 44 – the first recorded pedestrian victim. This was just after the speed limit was raised to 14 miles per hour.

With great speed should come great responsibility. Unfortunately, it came instead with great rage, because by 1902, Otto Bierbaum was shocked by the road rage he encountered while doing a road trip:

As we know, it’s been all downhill since then. Road rage and untimely death have grown with the spread of the car, accelerating as speeds got faster and faster. By 1950, Disney had a theory about road rage, which he captures in this really funny and entertaining Goofy cartoon. Watch how Goofy transforms as he gets behind the wheel. Sad to think that this was recognized in 1950, but 65 years later we still have no control over it.

In more recent years, responding to the  twin threats of bad health  and global  warming, cyclists have been trying to claw back just a little of the road space, trying to return to a time when travel was slower, saner and safer. Unfortunately, cyclists have become a focus for the road rage of some motorists, perhaps because they are such an easy target.

This rage is cloaked in all kinds of nonsensical justifications and demands, as captured in this lol satire on Ian Walker’s blog – it’s really worth clicking on … enjoy.

I’d like to build a collection of this kind of humour, and periodically share it with people. So if you have any great suggestions or links, please let me know!

Update: Here’s another link, sent in by Chris: http://www.copenhagenize.com/2009/08/walking-helmet-is-good-helmet.html