Recently I wrote about my sadness at witnessing a cyclist screaming abuse at another cyclist (Why Do Some Cyclists HATE Electric Bikes SO Much?) I saw it as an issue about electric bikes. But one reader wrote to me and said:


“My opinion of road bicyclists is that some are just haters. This one was diffusing his madness on an unfortunate lady. Doubt he would have said anything to a burly man.”

That really gave me pause for thought. Yes, there are some people out there who are full of rage and hatred, and who vent that rage by bullying other people. And some of those angry people sometimes ride a bike (I wouldn’t limit it to road bicyclists). And yes, it is about bullying. I am certain that cyclist would not have hurled that abuse if the electric bike rider was a big burly man.

Another case in point is this man in London who approached a young woman pushing a bike and told her that cyclists deserve to die (she caught the whole thing on her helmet cam). Many people who commented on this incident made the point that he would not have accosted a man this way. It was a simple case of a man bullying someone he felt it was safe to bully – smaller and younger than him, and a woman.

I believe that cyclists of all kinds – road cyclists, electric bikers, average cyclists and elite cyclists – should join together in community, because we have one vital thing in common – we are all vulnerable to being killed or maimed by the massive, fast-moving steel vehicles we have to share the road with. And many of us ARE maimed and killed, as we saw so tragically on the Sea to Sky Highway recently.

My post asking why some cyclists hate electric bikes so much stirred up some interesting debate, and someone made the very good point that we need legislation to make sure that electric cyclists do not threaten other cyclists. Fair enough, and a good point. But the bottom line is that nothing threatens a cyclist as much as a truck, bus or car – and a common threat is as good a starting point as any to build community.

Cyclists are often very kind to each other

I feel that sense of community often on bike rides, as other cyclists greet me, nod to me, or even talk to me. Maggie has felt it too. When she was a new bike commuter she was biking home from work and had a major problem with her bike. She phoned me to come and fetch her. As I drove off to find her, I was worried at the thought of her being stranded on the side of the road, all alone.

I needn’t have worried.

In the twenty minutes she was waiting, the only interaction she had with other human beings was when a cyclist stopped to see if she needed help.

The kindness of strangers …

Maggie was pretty blown away by this. She had been a car commuter for decades, and had never experienced human kindness from any other car drivers. But in just the first couple of weeks that she was a bike commuter, she experienced the human kindness of the community of cyclists. In fact, on her very first day of commuting, all she could talk about was how complete strangers on bicycles had said “Good Morning!” to her.

That is one of the things I love about cycling – it truly can be a wonderful experience on a human level. People who cycle tend to feel a sense of camaraderie with one another, and so we smile at each other, and sometimes we even say “Good Morning!” At traffic lights, slower riders will politely say “After you” to obviously faster riders. And the other rider will say “Thank you!”

Road Rage has been with us since cars were first invented

A very far cry from the world of cars, where each of us is locked in an alienating five tons of steel, most desperately trying to go faster than the next, communicating only via raised middle fingers, harshly honked horns, screeched insults, or even violence and death threats.

See for example this video about a truck driver who first knocks down a cyclist, then gets out of his truck and assaults him.

Sadly, this kind of behavior seems to be endemic to driving, for it has been around since the earliest days of cars. Way back in 1902, Otto Bierbaum spoke about a trip in a motor car from Berlin to Italy:

And this was when speed limits had just been raised from 4 miles per hour to 14 miles per hour, and Britain had just abolished a law requiring every car to be preceded by a man carrying a red flag or a lamp, to warn more sedate road users on horses, bikes or good old feet!

Just what is it about driving cars that brings out the thug in people?

Kristian Viladsen of Gehl Architects in Copenhagen, stated at the “On the Move in the Community” conference in Montreal that people have to be no further than seven feet apart to be able to understand each other’s emotions. Perhaps that explains the rudeness and hostility that is so prevalent in motorists: when we’re in cars, we can’t see other people’s emotions, so it’s easy to treat them really badly. We are encased in steel, and somehow, that robs us of our humanity.

By contrast, when we’re on a bike, we can see each other’s faces, and so we tend to treat each other humanely. So cycling takes us back to a kinder, gentler world, in which we can remain civil and humane towards one another. The intimacy of being almost shoulder to shoulder on our sometimes sweaty, dangerous and difficult journeys often brings out the friendly, kind and just plain human side of people. Here’s a couple we met on one of our bike rides – Dennis and Marg. If we had all been in cars, we would never have got close enough to have a human connection.

A Brave New World of Bikes and Human Kindness

It’s that kindly community of cyclists that makes me regard a future in which the last drop of oil has been squeezed out of the earth, and cars are consigned to the scrap heap of history, not as a nightmare, but rather as a Brave New World.

A future in which my children, my grandchildren, and my senior mother can safely pedal down the road, surrounded by friendly human beings on bikes, rather than hurtling, hostile drivers encased in tons of steel? Bring it on, I say! 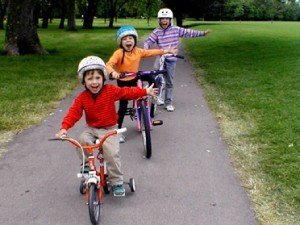