“Screw those pack of Critical Mass freaks deserves no sympathy. I have seen them collide and shove pedestrians down to the pavement and laugh as they shove another joint into their unshaven gobs. Contemptuous anarchists deserve no place at the discussion table.”

This was the garbled comment of someone who elegantly styles himself “Terdherder,” commenting on Don Cayo’s post, “On city streets, bike riders already pay more than their share”.

Are the people riding in Critical Mass a bunch of unshaven anarchists who don’t deserve a place at the discussion table?

I went down to the last Critical Mass in Vancouver to see for myself. I have been meaning to go for a long time, but setting off for a two hour bike ride at the end of a long working week is hard to do. I was motivated by the hate-filled ravings of a motorist on Craigslist. In the face of such seething hatred of cyclists, I felt compelled to show my solidarity with other people who ride bikes, and who like me risk being hurt by that tiny minority of motorists who are irrationally full of hate for cyclists.

OK, so do these people look like anarchists with unshaven gobs? 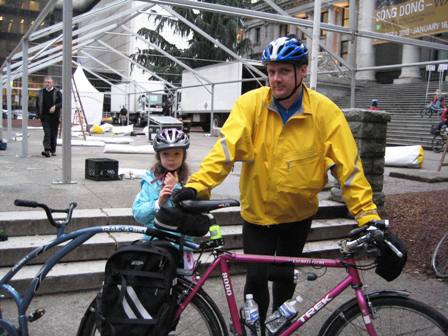 Yeah, I didn’t think so either. Honestly, I have seldom seen such a wide diversity of people as I saw at my first Critical Mass. From children to senior citizens, every sector of society was represented. From people who weren’t afraid to whoop their way down the street, to people who were somewhat shy about ringing their bicycle bells. The majority looked just like me – ordinary working people who had come out after a hard day’s work to quietly show their solidarity with other cyclists. And I was amazed that there seemed to be around 200 of us, despite the gloom and the drizzle.

There were all kinds of bicycles there too – a whole lot of entirely ordinary ones, and then some that looked more like this! 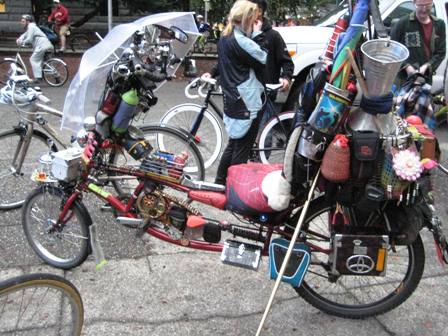 The ride set off promptly at 6.00 p.m. and moved sedately through the streets of downtown Vancouver. We were accompanied by two Vancouver police officers on bicycles, which made me happy, given that there were children in the ride. There was also one officer on a motorcycle, who at one point rode through the pedestrians on the sidewalk, which I thought was odd. But I’m not a police officer, so perhaps there was something going on that I did not understand.

Critical Mass organizers took care of all of us

Volunteer organizers buzzed around like mother hens, making sure that no one got left behind. Others bravely stopped the traffic at intersections, so that the procession could proceed safely. These people are called “Corkers” – presumably because they “cork” the traffic off, and are rewarded by choruses of “Thanks, Corkers!” from the cyclists passing through.

At first I thought it was odd to stop the traffic in this way, but then I remembered that this happens for every other procession and march that passes through Vancouver – only it is usually the police who stop the traffic, not the marchers/riders.

Still, it was really difficult for me to proceed serenely through red lights in the middle of the city. It was so counter-intuitive, and felt so risky. I am used to exercising 110% caution when I cycle downtown, because of the heavy concentration of stressed-out drivers in a hurry.

But after a time I settled into it. There was a wonderful feeling of relaxed solidarity with other cyclists as we cruised sedately along the streets. Most of the pedestrians did the standard Canadian thing: they smiled tentatively, and politely waited for us to pass by. It was noticeable that there was no impatient honking from motorists – they all seemed prepared to wait for us for the three minutes it took for us to pass by. I felt proud of the legendary tolerance of Canadians.

Imagine a city centre without cars!

I dared to imagine what it would be like if the central city streets were always off-limits to motorists, so that everyone could always proceed around the city on bikes or on foot in safety.

What a different city that would be! Quiet, safe, fume-free, devoid of motorized road rage. And that two-year-old who was killed in her stroller by a truck-driver making a right turn in 2009 would still be alive. So would the other 20 odd pedestrians who are killed every year by cars in downtown Vancouver. And the approximately 1,000 pedestrians who are seriously injured by motorists every year in downtown Vancouver would also be just fine.

I cycled off home, dreaming of a car-free city. Then two blocks from my home I was almost hit by a taxi cab doing a very fast, illegal u-turn – even though I was lit up with four lights and wearing a high-visibility vest. Oh well … dream on.

In a future post, I plan to write about the fascinating origins of Critical Mass!