I just found this remarkable video, taken by a young woman called leveret day with a helmet cam on 20 February 2015, in South Kensington in London. The context: leveret day was pushing her bike, and a male stranger walks up to her, and begins telling her a vicious joke about cyclists. He goes on to tell her that cyclists are their own worst enemies and that cyclists deserve to die. It seems that he is HIS own worst enemy – apart from being so full of hate that he will accost a young woman in the street, he is also so stupid that he was apparently unaware that he was being filmed the whole time.

I have a helmet cam (my awesome GoPro Hero, reviewed here).  You would pretty much have to be blind not to see a helmet cam on top of a helmet. Leveret day even mentions that she has filmed five cars running red lights with her camera, and he STILL does not realize he is being filmed. Her camera is a Chilli Technology Action Camera 120 H, shown below. Hardly a camouflage stealth camera! Or maybe he just didn’t care. It is possible the man is mentally ill, but that does not make it OK to abuse young woman on the streets.

Related: World’s Toughest (and Most Affordable) Helmet Cam – GoPro Hero Review and the Video it took as it Fell 10 Stories

Leveret day was very brave, staying calm and trying to engage in rational discourse. The man starts off with a vicious joke, then complains about having to pay £125 per year road tax. Leveret day points out to him that road taxes have not existed for years, and remarks that even if they did, many cyclists also have cars and would also be paying road tax.

She’s right: “In the United Kingdom it is a requirement to pay Vehicle Excise Duty, which is paid to the government for a vehicle licence. Since 1937 there has been no direct relationship between the tax and government expenditure on public roads.” The angry man was clearly born after 1937, so he has never paid “road tax” in his life. The term “road tax” is widely used in the UK but is a misnomer: “Essentially, Vehicle Excise Duty is an emissions tax. Payment for roads and other such infrastructure comes out of the Treasury’s general pot of gold, not from any specific taxation.”

The man then rapidly descends into outright abuse, telling her that “Cyclists are their own worst enemies. They deserve to die.” He goes on to tell her that he was once run over by a “f***ing cyclist.” Leveret day replies that she was once hit by a car, and that one should not generalize with broad strokes. As he is abusive by now, she asks for his name, but he refuses to give it (the only smart thing he did, but ultimately ineffective, as his face is now all over the internet, and his name is known to be James Nash). Nash then tells her that cyclists should be lined up against a wall and shot.

To me, this goes beyond random abuse and is in fact bullying. Why do I say this? Well, imagine that instead of being a young woman, Leveret Day had been a 200-pound, muscular man. I am absolutely certain that Nash would not have approached the 200-pound muscle guy and made offensive jokes and abusive comments. But wait … scratch that. It did not have to have been a big muscle guy. It could have been ANY man, and Nash would not have attacked. This was a simply a case of a man bullying a woman. Nash behaved as he did because he was secure in his belief that he was picking on a human being who was physically weaker than him. Someone who he thought couldn’t fight back. This makes his behavior even more despicable, in that it is cowardly bullying.

As it turns out, leveret day did fight back – with her intelligence, and with her camera. Good for her! She posted the footage of Nash’s abusive actions on her YouTube channel (which I just subscribed to – it has lots of great videos!).

Just goes to show that helmet cams are a great way to stop bullies of all kinds – or at least, to make sure they don’t get away with it.

As an another example, here’s my previous post about a man who was caught on helmet cam knocking a cyclist off his bike with his vehicle, then jumping out of his vehicle to attack the cyclist (who was down on the ground) – see Van Driver Knocks a Cyclist Over and Then Assaults Him – Watch the Viral Video. 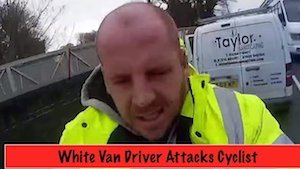 And here’s a post where a helmet cam captures the action as a cyclist is doored by a woman exiting a cab in New York. 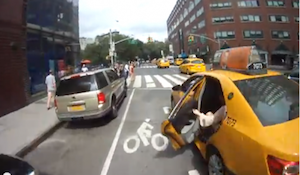 If you are a cyclist, consider getting your own helmet cam before someone attacks you …

To support this blog, please consider clicking on one of the Amazon links

before buying from Amazon. A small commission from Amazon helps pay for our time. It costs you nothing at all except a click. Or, if you are planning a vacation, please book your hotel after first clicking here for HotelTravel.com. For more information, please see “How Our Affiliate Links Work” in the right-hand side bar (down below if you’re on a mobile) or our Policies page.

If you don’t want to buy anything right now, fair enough – but please consider supporting this blog by SHARING this post (using the Share buttons below) or by LIKING our Facebook page. BEST OF ALL – just SUBSCRIBE to our blog (click on the link below, next to Mrs. Average Joe Cyclist’s lovely face). It makes you part of our community, and makes sure you get free updates about all our posts, once a week. Thanks in advance – reader support keeps us going and makes it all worthwhile!