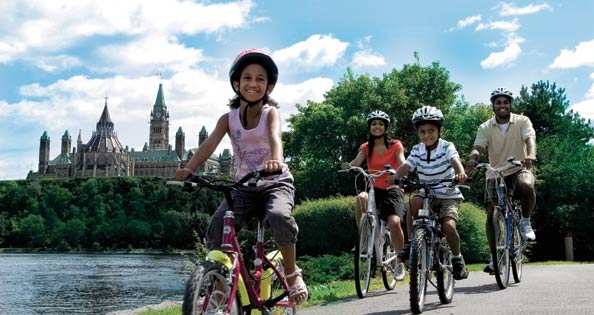 Part of Watson’s election platform was a 10-point Plan for Cycling. If Mayor Watson is true to his campaign promises, Ottawa cyclists can expect infrastructure improvement on a par with the cycling infrastructure improvements seen recently in Vancouver – if not even better. It seems that Watson has been moved to dynamic action plans by the stark realization that cyclists’ lives need to be protected. He said:

“Safety is at the heart of this initiative. I am concerned that the recent string of bike tragedies is having an effect on confidence. We can’t wait for safety. If the balance tips and people start to view cycling as risk, or antagonism builds with motorists, then we’ll suffer a real loss here in Ottawa.”

Mayor Watson champions a vision of Ottawa becoming a city that can be proud of its cycling infrastructure. He is also one of the rare Canadian mayors who realizes the potential of cycling tourism – joining Sooke’s mayor Janet Evans in that respect. Moreover, there is reason to hope that Watson’s pro-cyclist stance could spread, as he plans to work with neighboring municipalities in Quebec and Ontario.

Watson’s 10-point plan for cycling puts him in the company of Mayor Gregor Robertson, the bravely pro-cyclist mayor of Vancouver. Watson has undertaken to move forward with new dedicated bike lanes, “while respecting business concerns about the impact of bike lanes on their businesses” – easier said than done, as we have seen in Vancouver.

Mayor Robertson has been unflinching in standing up to the selfish demands of business owners – here’s hoping Mayor Watson will be as gutsy as Gregor. At the very least, it is  encouraging to see the election of a pro-cycling mayor in our capital city. It helps to offset the disappointment of seeing an anti-cyclist elected mayor of our largest city.

My thanks to fellow blogger bentguy for alerting me to the good news about Watson.