The good – and quite amazing – news is that New York City agreed recently to pay out almost a million dollars to settle a lawsuit brought by 83 Critical Mass cyclists in 2007. Some cyclists got $500; one got as much as $35,000. 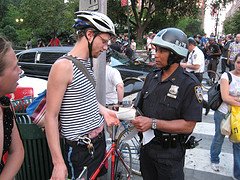 The conflict arises from the fact that the New York police have been unable to stomach Critical Mass cyclists flouting traffic laws. N.Y.P.D. spokesperson Paul Browne described Critical Mass rides as “anarchy”! So the N.Y.P.D. has deployed hundreds of officers, a mobile command unit and even a helicopter to monitor the rides!

Oooh … gotta keep an eye on those scary people on their 20 pound bicycles!

I have to say that this kind of angry, punitive approach contrasts sharply with my impression of the Vancouver Police during Vancouver’s Critical Mass last month. It seemed to me that the two policemen on bicycles were there more to protect than to monitor. Which is as it should be.

Critical Mass is a peaceful demonstration that minimally disrupts traffic just once a month, while making a point that really needs to be made: cyclists have the right to take up road space.

Critical Mass in New York City has a particularly proud record. Cycling in this city was much more dangerous in the 1990s, with few bike lanes. Critical Mass emerged in Manhattan as a way for cyclists to promote cycling safety and visibility by cycling together in a group, and it quickly grew. Just as in Vancouver, the ride attracts all kinds of cyclists, from all strata of society: families, bike messengers, kids, social activists, children and grandmothers.

Lawyer David B. Rankin, one of the lawyers who represented the cyclists, expressed the optimistic hope that the city’s policies toward the Critical Mass cyclists have now changed:

“We hope that the cyclists and the N.Y.P.D. can figure out a way to work together.”

Let’s hope that Critical Mass cyclists and the New York Police Department can indeed figure out a way to work together. Perhaps the N.Y.P.D. should take a trip up to Vancouver and observe how it should be done. 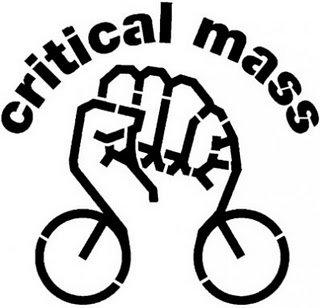