Mountain2Mountain is an organization based in Colorado, USA, that believes that women should be able to make their own choices and create their own solutions. Part of this is promoting the ability of women and girls to ride bikes. For example, they work to promote the right to bike in Afghanistan, believing that bikes offer independent freedom of mobility for women in a country that’s still considered the worst county in the world to be a woman.

On Friday I was summoned by Joe to collect his beloved bike from our local bike store. It was 3:00 and I braced myself for very bad rush hour traffic. However, it turned out to be a blessing. As I sat in traffic I was listening to our local public radio station and I heard an interview with Shannon Galpin, Founder of Mountain2Mountain. Shannon is an humanitarian, activist, writer and speaker, doing amazing work for women’s rights in Afghanistan – including the right to bike!

Shannon Galpin was the first woman to ride a mountain bike in Afghanistan in 2009. I heard Shannon being interviewed on CBC by host Steven Quinn. Shannon said that being a female cyclist in Afghanistan is incredibly risky. Women cyclists in Afghanistan are harassed, have rocks thrown at them, and motorists veer towards them. Also, their honor and the honor of their family is threatened because straddling a bike is considered physically obscene. Women on bikes or horses are expected to be behind a man, riding sidesaddle.

Bikes offer independent freedom of mobility for women in a country that’s still considered the worst county in the world to be a woman.

Can a Bike Mean that Much?

At a grass roots level, more and more women in little pockets are teaching each other to ride. They have grown up seeing women gaining more rights, and fighting for their rights in the post-Taliban era. Women have started to think that they should also be able to have the freedom to ride bikes, like the boys.

A very few Afghani women ride bikes as transportation. There are a couple of small groups who ride for pleasure, but they make a statement as they do it; to normalize seeing women on bikes. They’re doing it as a social act.

The bike is one piece of equality. Now there are women running for parliament in Afghanistan in unprecedented numbers. The bicycle was an integral part of the women’s rights movement in the USA in the 1890s, and that appears to be playing out in Afghanistan now.

Now we see this parallel in Afghanistan: the beginnings of freedom of movement and independence for women on two wheels … 120 years later. As Susan B. Anthony (American suffragette) said in 1896:

“Let me tell you what I think of bicycling. I think it has done more to emancipate women than anything else in the world. It gives women a feeling of freedom and self-reliance. I stand and rejoice every time I see a woman ride by on a wheel … the picture of free, untrammeled womanhood.” 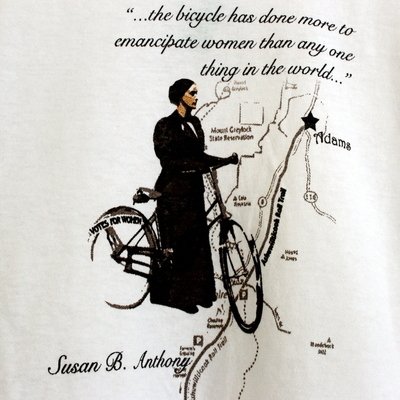 119 years later, the sight of those brave women riding bikes in Afghanistan would no doubt make Susan B. Anthony rejoice, if she were still alive to see it!

“What would you do if you couldn’t ride a bike? The women of the Afghan National Women’s Cycling Team are breaking gender barriers with every pedal stroke as the first women to ride bikes.”

“Join a ride or create a movement in your local community. Take photos and share your stories with us by tagging #GlobalSolidarityRide in social media.”

What Mountain2Mountain Hopes to Accomplish

People take cycling for granted in the West. We grew up riding bikes. Now we want to highlight the bravery and the strength of Afghan women and to see them not as victims but as advocates for their own future.

Mountain2Mountain wants people to understand that bikes around the world are an incredible vehicle for social justice.

Bikes get girls and boys to school, bikes increase access to midwives and medical care with bike ambulances. Bikes reduce sexual violence and harassment. The bike is an economical, green and easily accessible vehicle for change.

Shannon went to Afghanistan to work for women’s rights, because she believes that one woman can make a difference. She was not focused on bikes – she was focused on prisons, schools, and street art. She started riding a bike after about a year as a means to challenge the gender barrier, as she had not seen any women on bikes. She thought bikes could lead to grass roots change in rural areas.

Shannon has now ridden her bike in Afghanistan on 20 visits. As a foreign women, she says she is perceived as a hybrid gender, essentially an honorary man. So she garners curiosity rather than hostility. Her bike became an icebreaker for roadside conversations with men that would never have happened if she was in a car. It helped her understand the Afghan society better.

Mountain2Moutain supports empowerment of women in conflict. They run a project called Strength in Numbers and say:

“The backbone of Strength in Numbers is the belief that one woman can make a difference but an army of women could change the world. Using bikes, long a symbol of freedom of mobility, and a tool of the women’s suffrage movement in America in the early 1900s, to unify the women we work with to pedal a revolution of change for women’s rights.”

“Round the world the bike is used a direct tool for social justice for women and girls – fighting gender violence, increasing access to education and healthcare, and providing overall freedom of mobility.  Not to mention two-wheeled joy.  The bike was an integral part of our own American women’s suffrage movement.

“We have developed the Strength in Numbers program, including its expansion beyond Afghanistan with our Global Launch in Rome next year.  We need everyone’s help to come together and make the world a better place for women and girls around the world!”

Learn more about how to support this great organization here – they organize gear drives, sponsorship, solidarity rides, and cycling camps.

Illumination and inspiration during Friday rush hour traffic! Some things were just meant to be. I hope you’ve been inspired and maybe we’ll see you at one of the rides! Here’s one last quote I could not resist:

“To men, the bicycle in the beginning was merely a new toy, another machine added to the long list of devices they knew in their work and play. To women, it was a steed upon which they rode into a new world.” ~ Munsey’s Magazine, 1896