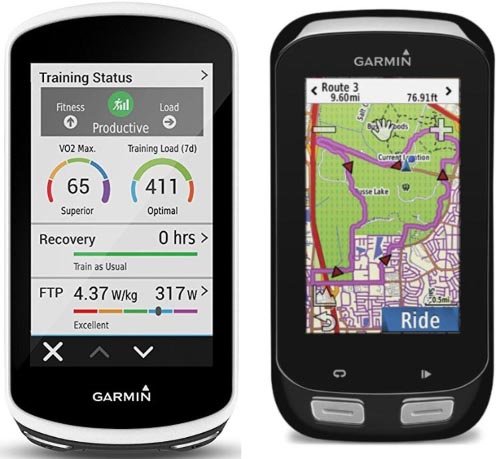 e click here to see if they are still available at this price.

The post starts with a chart that highlights only the features that are different between the two bike computers. Then I discuss the similarities, and then I present a chart that summarizes the new 1030 features, and predicts whether these features will remain unique to the 1030. The post concludes with advice on which Garmin Edge to buy, based on your needs. Once you make your choice, please consider clicking through from one of my affiliate links to buy. It is the only way I can earn any income for the many hours of work I put into these reviews … and it costs you nothing – a real win/win situation! I present a range of buying options at the end of this post.

The 1030 is an upgrade, not a new product. As such, both the 1030 and the 1000 are premium bike computers that will provide you with almost any data you can think of. The two bike computers share the following key features:

Update April 2019: For a time after the 1030 was introduced, prices were slashed on the Edge 1000. Back then, you could get an awesome deal on the Edge 1000, and I was advising people to do just that, if they did not need the increased battery power of the 1030. However, that is now over, and the prices are very similar. Which to my mind makes this a bit of a no-brainer: personally I would not miss out on the many new features of the Garmin Edge 1030 just to save around $50! Also, it has become hard to buy new Edge 1000 units. The only exception: if you are prepared to buy Used or Refurbished, you can still get a great deal on an Edge 1000, here on Amazon.

OR, buy an Edge 1030 from one of these reputable online suppliers:

I prepared this handy little chart that summarizes the new Edge 1030 features, and my predictions as to how long these features will remain unique to the 1030. After the summary, I have more details on each point.

This is probably the most important difference for most people. The Edge 1030 actually has three innovations to improve battery life. First, it has a claimed 20 hours battery life instead of the 15 hours of the 1000. Second, there is Garmin Charge, which adds 24 hours to battery life. This is basically an external battery pack that clamps onto the bottom of the Garmin mount, and seamlessly and automatically connects with the Edge 1030. This is an optional extra – it does not ship with the basic unit.

Third, the Garmin Edge 1030 has battery save mode available. This extends battery life up to 50% by darkening the screen while still tracking ride details. This was introduced with the release of the Garmin Edge 820, and is a neat feature when you start running short on battery charge. However, if you are packing an external battery, that is extremely unlikely to happen. I think my own ticker would run down first!

Physical Differences between the Garmin Edge 1030 vs 1000

Both of these bike computers look more like smart phones than bike computers. The Edge 1000 used to have the largest screen of any bike computer, making it great for navigation. However, the screen of the Edge 1030 is noticeably bigger – 3.5 inches, as compared to 3 inches. So, if you need a big clear screen, this could be an important difference. The Edge 1030 achieves a larger screen with hardly any difference in the weight and size of the unit, by having the screen take up more space with less “wasted” space around it. As a result, the Edge 1030 weighs 4.8 oz (123 g), while the Edge 1000 weighs 4 oz (114.5 g). This difference is so minor, I am sure that most people could not tell the difference with their eyes closed.

On the other hand, the dashboard of the Edge 1030 has been totally revamped, and to my mind is much more user friendly and easy to use. Also, there is a new controls area, which you can access simply by swiping down, even mid-ride. There, you can adjust settings that you might want to adjust while riding, such as switching off notifications (say for example if you are suddenly plagued by a stalker, or someone wants you to get home and take out the dogs), checking the weather, etc.

The start/stop buttons have moved on the 1030, so they are now on the bottom of the device. Assuming you are using an out front mount (which ships with most Garmin Edge bike computers), this is way more convenient, as the buttons are very handy, right in front of you.

The Garmin Edge 1030 ships preloaded with three apps, including the new Garmin Connect app TrainingPeaks. This is a very cool virtual coach that can give you daily training updates. This app can be a key feature for those in serious training. However, TrainingPeaks can also be downloaded from the app store to the 1000, 820, and 520. So, you don’t have to get a Garmin Edge 1030 just to get TrainingPeaks!

Something brand new with the 1030 is connectivity via BlueTooth Smart (not just ANT+, which has always been the standard for Garmin). BlueTooth Smart (aka BlueTooth 4.0) is a low-energy way to connect wirelessly to your smartphone and upload data. This extra dimension of connectivity opens the door to using more devices (third-party sensors, including heart rate, speed, cadence, and power sensors ). This brings the Garmin Edge 1030 in line with the Garmin Fenix 5 (my all time favorite multi-sport watch) and Garmin Forerunner 935 (the highly regarded triathlon watch). Also, BlueTooth Smart uses less battery power to connect to your smart phone, so this is going to save on battery power, especially when you are using a lot of data-heavy information from your phone, such as Strava segments, and messaging.

Note that this feature will not be rolled out to other Garmin Edge devices, as it is hardware dependent.

Automatic route downloads: I find this to be a massive improvement: up to now, if you made a route in Strava you had to physically download it to your computer, then copy it to the new files folder of your Garmin unit, as I explained here. However, with the Garmin 1030 new routes will download automatically to your Garmin (assuming of course you have linked your accounts). It is a great improvement, and not before time, either. I was always amazed that I had to go to that much trouble. This useful feature will soon be rolled out to all Garmin Edge units that are compatible with Connect IQ (i.e. pretty much all of them).

Also, the 1030 will alert you to nearby Strava segments. Previously, you had to plan it all in advance and download segments to your unit. It will also give you real-time data on those nearby segments. Of course, to access Strava segments on your bike at all, you do need to have a premium subscription. However, if you can afford a Garmin Edge 1000 or 1030, $59 per year for a Strava subscription is probably not going to break your bank. (It is money well spent, in my opinion – read more about the benefits of Strava here.)

Trendline Popularity Routing: this is a a brand new mapping feature on the Garmin Edge 1030. When you tell it to plot a route for you, it draws on its massive database of real life cyclists to choose the routes most popular with cyclists. I could have used this in Paris, where Google Maps kept sending me on suicide missions through the densest traffic I have ever seen in my life!

This is an intelligent feature: for example, if you are using your mountain bike profile, it will select routes that are popular and that make sense for a mountain bike. If you are on a road bike, it won’t send you down a gravel path! Basically, it will differentiate between road, mountain and gravel categories. Terminator movies notwithstanding, I don’t mind intelligent computers if they make my life easier!

I predict that this feature will not be rolled out to other Garmin Edge bike computers any time soon as it is a unique selling point on the 1030. However, at some point in the middle to distant future, it will almost certainly be rolled out to the other units. It’s just too good not to be shared with other units.

Both have this, and the Edge 1030 also gives you alerts of upcoming sharp turns. This works well, and helps you not ride off the road!

The New Up Front Mount on the Garmin Edge 1030

Out Front Mounts are cool, but they are not new. However, the 1030 introduces a more flush design, to minimize air drag (taking inspiration from the Wahoo bike computers, perhaps). The mount is lightweight, and solid as a rock. I cannot say that it helps me cycle any quicker, but it sure is handily placed. Attaching Varia devices gets a lot easier with the 1030, as Garmin Varia devices can be attached to the power points on the out front mount. (Here is my review of Garmin’s safety feature, Varia Vision.)

Aesthetic Differences between the Garmin Edge 1030 vs 1000

However, this feature is limited, in that you can only message other cyclists if both of you have a Garmin Edge 1030. This feature will probably not be rolled out to other Garmin Edge bike computers any time soon, as it is a selling feature for the 1030. However, it will surely be rolled out at some point, because restricting it to the 1030 units makes it not very useful. For messaging to succeed, a mass user baser is required – bit of a Catch 22 for Garmin there!

Once you make your choice, please consider clicking through from one of my affiliate links to buy it. It is the only way I can earn an income from writing these reviews … and it costs you nothing at all. So you get the best bike computer for your needs, and I get to keep on blogging – a real win/win situation!

Or, buy a Garmin Edge 1030 from one of these reputable online suppliers: