This post lists all of the upgrades to be found in the new Garmin Edge 1030 Plus vs the GPS bike computer it replaces, the Garmin Edge 1030. At the end of the post we include a video that showcases the new features.

Please note that as an Amazon Associate I earn from qualifying purchases.

Garmin has just updated their premium, flagship GPS bike computer – the Garmin Edge 1030 Plus. Of course, that’s a big deal. But how big a deal is it? After all, we cyclists already have two excellent choices in the Garmin Edge 530 and 830. And the 1030 was an impressive option too.

The new Garmin Edge 1030 Plus is all black, rather than mainly white. Most people seem to be happier with that, but personally the color makes no difference to me.

The new model weighs in at 125 grams (4.4 oz), which is an inconsequential 1 gram (0.04 oz) extra. Also, there is no slot for an external memory card. The same thing accounts for both of these changes: the new Garmin Edge 1030 Plus has 32 GB of onboard memory, rather than 16 GB. So, you don’t need an extra memory card. You can have as many high-quality maps on your bike computer as you like, as well as workouts, routes, sensor profiles, user profiles, etc.

The new Garmin Edge 1030 Plus ships with a standard mount and an out-front mount. And like all Edge bike computers, it ships with a USB cable to charge it, spare bands for mounting, and allen keys.

Just as happened with the 530 and 830 upgrades, the Garmin Edge 1030 Plus has benefited by a major upgrade to its processor speed. Garmin claims it is now double the speed. Of course, it is hard to verify this subjectively. Some things seem faster; other things were already so fast it is really hard to assess whether they are now double the speed. In general, there are less annoying waits for something to process.

Depending on how many features and sensors you use – and how brightly you run the unit – the battery could now run for up to a whopping 48 hours. If you use every possible feature, it might only last 24 hours. For most users, it would be reasonable to expect 36 hours.

It’s hard to see how anyone would ride for longer than that, but if you are a super-athlete, there is an option to extend. This unit still has the connection port to attach an external Garmin Battery, adding on another 24 hours of battery life.

This is one of the major upgrades. Getting more maps has always been a bit of a chore with Garmin bike computers. You either had to pay for them, or you had to go to third-party suppliers. If you did the latter, the maps did not always work as well.

But now … drumroll … you get a bunch of free maps pre-installed. And, if you need more, you can just log into Garmin Express download them for free!

Also, crucially: the map performance is now more like a smart phone than a bike computer.

New Re-Routing Options on the Garmin Edge 1030 Plus

The Garmin Edge 1030 Plus retains a great navigation system, with audible and visual prompts. This pairs up nicely with the very high quality maps. But you could still go off route – either by accident, or because you want to explore. If so, there are now three options to choose from:

You get a visual preview of each choice, so you can choose wisely. For example, if you were very tired, the cutting across choice might make sense.

The Pause Route option is new. Let’s say you are on a planned route and you suddenly decide to stop for a coffee. The coffee shop is four blocks off your route. Previously, the bike computer would be beeping at you, trying to tell you that you are off route, and need to do a U-turn. Whether that happens in your vehicle or on your bike – nobody likes a nag!

It is great to be able to just pause the navigation, and get a coffee in peace and quiet! 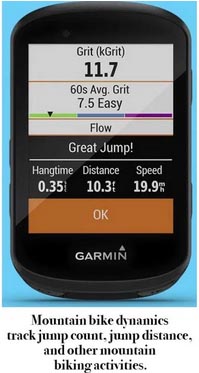 Previously, the Garmin Edge 1030 was very much a bike computer for serious road bike riding. But that has changed. With dedicated mountain biking data and sensors built right in, it is now a strong contender for the best mountain biking computer too.

Gamin’s fun and motivational mountain bike metrics debuted on the 530 and 830. Now, they are also supplied with the 1030 Plus. They give you a wealth of new data. Knowing how much air time you had, or how far you jumped, are great ways to motivate yourself.

Trailforks is Built In to the New Garmin Edge 1030

Trailforks data is now built in, including all the mountain bike maps. Previously these were only on the Edge 530 and 830. The 1030 did get Trailforks in a software update, but that did not include the maps.

This upgrade has it all, so that wherever you are mountain biking,  you can search for the best and most suitable trails around you. Data of course includes difficulty level, so you can make the right choice. And you can of course add your preferences to the setup on your unit.

The Garmin Edge 1030 Plus will show you what climbs are up ahead, how high they are, and how long they will last. This is very useful information.

Training Features on the Garmin Edge 1030 Plus

Of course, Garmin Edge computers have so many training features, it would be hard to list them all in one post. And many people take advantage of third party training apps as well, such as Training Peaks. But there is some new stuff here.

First up is a new Daily Suggestion Workout

You could then choose to get the details from your regular training app. Or, if you plan workouts from Garmin Connect, these will automatically pop up when you switch on your bike computer.

The LiveTrack experience has been improved for those tracking you. Now it shows three sets of date. It shows a purple line for your planned route. It also shows a blue line for your actual route. Finally, a blue dot showing your location updates every 30 seconds.

This update will go out to other Garmin Edge bike computers later this year, via a software update. This will include the Garmin Edge 1030, 830, and 530.

This is probably my favorite update. This is because I am slowly becoming a grumpy old man, and can get quite irritable when I am setting up new tech!

As you set up your new Garmin Edge 1030 Plus, it will automatically import all your activity records, user and activity profiles, and all of your sensors (up to 30). It targets all the sensors you have used for the last year. And it knows what you have named your sensors too, and imports that information. This makes for a really useful and stress-free setup process.

Unlike with the Wahoo, you still cannot configure phone based data fields.

Changes to the Screen of the Garmin Edge 1030 Plus

First, the blue halo that hung around some of the Edge 1030 screens has been eliminated.

More importantly, the touch screen display has been upgraded. Basically it is now the same screen as the upgraded 830, but bigger. As we all noticed, the 830 screen was a major upgrade in terms of the touchscreen working so much better.

Similarly, the Edge 1030 Plus screen is much improved. Expect to be able to use it (without cursing) in the rain, while wearing gloves!

The iconic Garmin beeping noise has changed. The tone is very slightly different, and it is noticeably louder. Also, the speaker is in a different spot.

The new Garmin Edge 1030 Plus is integrated with the Shimano Steps Ebike System, offering a dedicated ebike status screen that is ideal for keeping track of your bike’s battery life, the mode you’re in, and other ride data.

What is Shimano Steps?

So, the bottom line is that this is not a revolutionary update, but it does have some very sweet spots. The most attractive will depend on your own needs and preferences.

If none of the above apply to you, you are probably best advised to stick with your existing bike computer. Unless of course this is your first bike computer – in that case, if you can afford it, you definitely could not go wrong with the new Garmin Edge 1030.

If it’s hard to decide (and it usually is), check out our new post:

Good luck with choosing the best bike computer for you!