You are here: Home / Bike Commuting / Bike Safety / Ethical Environmental Destruction (aka – No One is Evil as Long as Someone Else is More Evil)
Pin
Share
Tweet 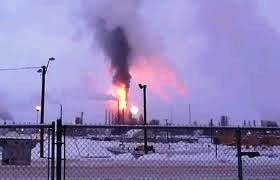 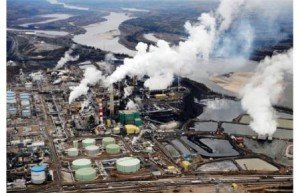 The recent explosion on the Alberta Oil Sands has put the potential evils of oil back in the spotlight. However, Canadians are invited to believe that in fact our oil is “ethical.” How did our oil reach these lofty moral heights?

I did a bit of researching and came up with an interesting timeline:

In north-eastern Alberta, certain areas around the Athabasca River have extremely large deposits of bitumen, which is a very heavy crude oil. Once upon a time aboriginal people (Cree and Dene) used this to line their canoes. However, since oil became so important in our global economy, the oil sands have been seen as a potential source of serious income. Various companies have been trying to take advantage of this opportunity since 1967. However, it is only since oil prices began to soar in 2003 that production has expanded massively – with accompanying environmental damage, which has caused many Canadians to become troubled.

The oil sands quickly became known as “dirty oil” because extracting it produces a lot of greenhouse gases, which inflicts a lot of damage on ecosystems. (Although apparently if you look at the oil sands from high enough in the air, everything looks fine and dandy).

The dirty oil allegations (which are strongly supported by some environmentalists in the USA) may threaten the building of the Keystone pipeline, which would transport bitumen to the US Gulf Coast market, thus making an awful lot of money for a select handful of people. Unsurprisingly, the Harper government wants to make sure that these allegations do not stop this lucrative plan from forging ahead.

Some people in Omaha REALLY don’t want our oil –
no matter how “ethical” it is.

3. Right Wing Apologist Steps up for the Oil Sands

While the oil sands do seem to be dirty oil, some people have been eager to point out that other people’s oil is even dirtier! Conservative author Ezra Levant wrote a book called Ethical Oil: The Case for Canada’s Oil Sands (2010). Levant argues that our dirty oil is at least produced in a country that respects human rights, pays fair wages, and is environmentally responsible. Therefore, it’s much more ethical than the comparatively filthy oil produced by counties that can boast none of the above, and which instead prefer to ride roughshod over politically correct garbage like human rights and the environment. Levant cites examples such as Venezuela and Saudi Arabia – interesting, as Saudi Arabia is the only country with larger oil deposits than Alberta.

This past week, our new Environment Minister, Peter Kent, echoed Levant’s argument, declaring that the US should rather buy oil from Canada, as our oil is ethical, whereas the unethical oil pedlars will only use their oil income to fund terrorists.

Harper quickly echoed Kent, voicing his intent to explain to the world how ethically superior Canadian oil really is. It seems that our oil is ethical because we are ethical:

I am thrilled to hear that being ethical is so contagious that it can even infect oil. I hope the infection spreads! 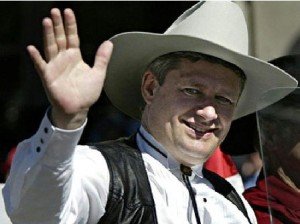 Would YOU buy a used bike from this man?

6. Keep Your Eyes on that Card (that “Ethical Oil” Card)!

I buy Ethical Bean Coffee, so I do get the argument. It’s not entirely without merit. But the problem is the motivation for the argument. The intent seems to be a smoke and mirrors kind of thing, designed to distract us from the bald reality that both the federal and the Albertan authorities are failing to put in sufficiently tough regulations to protect the environment; in fact, Ottawa has been painted as an absentee oil-sands overseer. Ed Whittingham, executive director of the Pembina Institute, says:

“It’s a rhetorical device; it’s bait and switch. It’s designed to make us forget about the negative environmental impacts we have in Canada because you are comparing to a completely lower standard in other countries.”

“The fact that the Saudis or Nigerians or others are worse in human rights and environment is not relevant. We can’t do anything about that; we can deal with our oil sands and we are not.”

If I had my way we’d scrap all our cars and use less oil anyway. But that ain’t gonna happen anytime soon; in the interim, if Canada wants to take the moral high ground and pretend to have “ethical oil,” let’s do so because we are doing our level best to minimize environmental damage, not because we as a country aren’t nearly as awful as some other countries.