You are here: Home / Cycling Reviews / Bike Tours and Trails / Cycling in Canada / Cycling in Vancouver / Gateways on the Central Valley Greenway: The Wonderful and the Weird
Pin
Share
Tweet

The Central Valley Greenway runs from New Westminster to Vancouver, via Burnaby. It’s a wonderful cycle route, much used and loved by thousands of BC Lower Mainland cyclists. But wow, it is a route of extremes, with many sublime parts, and some horrible bits, as described in a previous post.

In response to some debate on this blog, I thought I’d zero in on the wonderful and weird gateways on the Central Valley Greenway, going from east to west.

The Central Valley Greenway comprises an Alice-in-Wonderland-like mishmash of the sublime and the absurd. To kick off with the absurd, here is the entrance to the Brunette River Natural Area:

For no reason that I could possibly fathom, there is a giant, concrete block strategically placed adjacent to this narrow entrance. Is the idea that if you are so uncoordinated that you cannot get your bike through the narrow gap, you deserve to fall on the concrete block? Or is it just a further test of agility? Or perhaps the beginnings of an interesting art project, akin to Stonehenge, only smaller?

After that, the intrepid cyclist immediately bounces back from the absurd to the sublime. The whole length of the Brunette River Natural Area is sublime, as it winds its way through jaw-dropping splendour as impressive as the Galloping Goose Trail on Vancouver Island. At the other end, the western access to the Brunette River Natural Area used to be just as awful as the east access, with a large gate blocking the cyclist’s way, leaving only a narrow gap between the gate and an unappealing ditch. Now, however, it looks like this.

Talk about an immense improvement! Now one can just cycle through, without having to squeeze through a tiny gap and risk falling in the ditch. And cars are still effectively barred, which I guess is the point of all these gates (only some have really gone to lamentably overkill lengths).

Right after this uplifting moment, cyclists encounter another excellent improvement that was recently made on the Central Valley Greenway. It’s at the intersection of Cariboo and Government, which I have previously described as really, really ugly, because of the combination of four lanes of often heavy traffic, plus a train crossing. Previously cyclists had to negotiate the four lanes of traffic, while crossing the railway line, to take a left onto Government. Now, there is this wonderfully wide track on the side of the road for cyclists to cross over.

This is a massive improvement, so THANKS to whoever conceived it and made it happen. I only have one criticism: there is no signage that actually says this is for cyclists. So the first time I used it, I was worried that I was illegally riding on the sidewalk (and we all know that makes some motorists angry enough to want to kill cyclists – although no one knows why this is so). I have now decided that it is most probably intended for cyclists, and therefore OK to use.

After this one goes on for miles and miles without serious impediment or obstruction in the form of bizarrely designed gateways. Until one gets to the unpleasant “temporary” bit of the Central Valley Greenway on Stillcreek. Just after surviving the truly nasty industrial Stillcreek bit, replete with road debris, puddles, potholes and various vehicle dangers, the fearless cyclist encounters this: 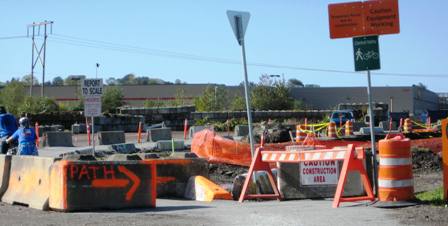 This entrance way changes quite frequently, but this is a pretty good idea of what it usually looks like: narrow, convoluted, and concrete-blocked. And I use the word blocked deliberately. This is yet another test of cyclist agility.

Next, my personal “favourite” on the CVG – this one just plain drives me crazy: 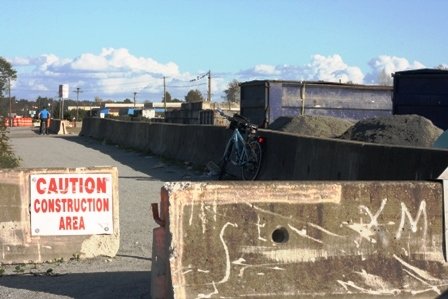 This is at the Costco end entrance to the nasty “temporary” bit that links with the nasty industrial Stillcreek bit. There are two parallel concrete blocks that force cyclists to do an intricate little figure 8. For no good reason that I can ascertain. Or am I missing something?

Of course, many of the gateways on the Central Valley Greenway are entirely sensible: 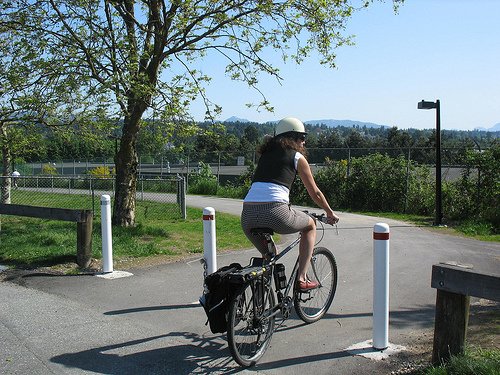 This is the entrance to Hume Park on the Central Valley Greenway in New Westminster. It’s effective, in that it excludes cars. But it’s trouble-free, and does not require any special agility. This makes it accessible for all cyclists, including children.

Here’s hoping that eventually all the gateways on the Central Valley Greenway will look like this!