You are here: Home / Bike Advocacy / Driver Cuts off Cyclist and then has Violent Road Rage – and Trolls Attack
Pin
Share
Tweet

Here is another violent incident caught on a cyclist’s helmet cam. A driver cuts off a cyclist, causing the cyclist’s hand and front wheel to bump the van. The cyclist yells, but his yell shows only amazement, not anger. The driver leaps out of his car (leaving a child in the car), and then screams violent abuse at the cyclist, using foul language constantly. The cyclist stays calm and polite, and even calls the screaming man “Sir” (while the man is calling him m*****f*****). Despite the cyclist’s refusal to engage, the driver just continues to escalate, until he is kicking the cyclist’s bike, and the cyclist is yelling for someone to call the police.

Related: Best Helmet cam/Camcorder for Cyclists under $130 – World’s Toughest – GoPro Hero Review and the Video it took as it Fell 10 Stories

I highly recommend these to cyclists, as they do enable us to record when we are attacked. Eventually, I hope attacks on cyclists will decrease, as people become fearful of being caught on helmet cam.

Language alert: I try hard to maintain a family-friendly, polite blog, both because that is what I want, and because my daughters read it (sadly, only very occasionally). I couldn’t find a copy of this video that had the bad language edited. So if bad language is offensive to you, please do not watch this video.

Of course, this video gave rise to heated arguments on Reddit, Yahoo and YouTube. The level of the discussion on YouTube was depressing. Many commentators started out with yet more bad-language insults towards the cyclist. The vast majority of commentators conceded that it was blindingly obvious that the motorist was in the wrong, both in cutting off the cyclist and then in screaming at him and kicking his bike. However, even this did not stop some commenters from insulting the cyclist. Among other things, he was accused of being too polite (!). His accusers were anything but, using language that I will not repeat here.

This kind of discourse saddens me. When the internet first became interactive, I was very excited, because I saw it as opening up possibilities for people from all over the world to communicate. I saw us as going from a planet full of people passively watching content (TV), and becoming a planet full of people who actively create content and communicate with each other.

To some extent this is true. Blogging is a perfect example of that. Average people like me to get to create content, and out there, a whole lot of other people can choose to read it, and sometimes to engage with me about it (both in Comments and on my Facebook page). 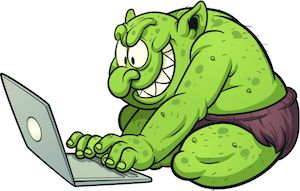 But there is a very nasty underbelly to this. The Internet has a huge number of trolls.  A modern-day troll is defined by Wikipedia as “a person who sows discord on the Internet by starting arguments or upsetting people, by posting inflammatory, extraneous, or off-topic messages in an online community (such as a newsgroup, forum, chat room, or blog) with the deliberate intent of provoking readers into an emotional response or of otherwise disrupting normal on-topic discussion.”

People like this can make parts of the Internet very ugly, and may even spoil it for people who just want to have a civilized conversation. This problem is so severe that, for example, in 2013 Popular Science shut down all commenting on their posts, stating:

“As the news arm of a 141-year-old science and technology magazine, we are as committed to fostering lively, intellectual debate as we are to spreading the word of science far and wide. The problem is when trolls and spambots overwhelm the former, diminishing our ability to do the latter.”

Overwhelmed by trolls, Popular Science just shut down the community completely. By way of complete contrast, YouTube simply ignores trolls, allowing them to post the most amazingly vile comments and language (including sexist and racist comments). Ken Fisher at Ars Technica makes this comment:

“There is a slide in one of my presentation decks that has two images: a screenshot of typical YouTube comments and `the filthiest toilet in Scotland’ (Trainspotting reference). The slide is titled `What do these two things have in common?’

After I let a few people guess, I tell them the answer: `The management doesn’t give a damn.‘ “

For my part, I do not want to shut down online conversations. Management of this blog and my Facebook page (management being just me), most certainly does give a damn. I invite interaction and am very happy to have it. However, in my tiny sliver of the Internet, I am only interested in having constructive dialogue. Whenever someone starts a comment on my Facebook page with words like “You are an idiot …” (and sometimes far worse) I don’t read any further. I just think “Troll” and immediately ban the commenter, permanently.

This way, I keep the discourse clean, polite, pleasant, and constructive for me and for readers.

I don’t ban constructive criticism or dissenting opinions expressed in civilized terms, of course. But when it is clear that the commenter is a troll, with the primary aim of being rude and destructive – I just hit the Ban button.

It’s usually fairly easy to tell the difference between someone who simply disagrees, and someone who is a troll. You just have to imagine it as a face-to-face encounter – for example, four people at a dinner table together – and ask yourself: “If we were having dinner together, would the commenter use the same words?” If not, then the commenter is merely a cowardly bully/troll, hiding behind the anonymity of the Internet to be abusive in a way that they would never dare to be in real life (or even, one hopes, WANT to be if they were face to face with a real human being).

Obviously, someone having dinner with you, who disagreed with a comment you made, would not lead with “You’re an idiot (or much worse)!” No, they would say something like: “Mm. Interesting opinion. I would tend to disagree with you. Here’s what I think …”

I formed this opinion a long time ago, as a philosophy student. We had entire lessons that were devoted to learning to share our opinions and LISTEN to the opinions of others. I would prepare for the lesson and walk in, confident in my 20-year-old head that I had the absolutely true answer, and would be able to pass on my wisdom to the others. Then I would actually LISTEN to my peers, and I would find my opinion changing and shifting. By the end of the lesson, I would walk out with a new answer. I had not given up on what I thought I knew. I had merely learned something new by seeing someone else’s perspective, refined my opinion, and grown a little in my thinking. To me those were the most valuable lessons of my entire education, and I have tried to live my life by what I learned there.

Unfortunately, the Internet is all too full of trolls, and it’s hard to find venues for real dialogue. I really do wish YouTube would do some management of comments. I find it almost impossible to read the comment sections because the language is so vile and the sentiments so negative, offensive, and even violent. It reveals a depressingly stupid and aggressive side of human nature that I just don’t want to be contaminated by.

I would love to hear readers’ opinions on this issue of trolls on the Internet!

Did you like this Post or find it useful? If so, please support our blog in whatever way you can

To support this blog, please consider clicking on one of the Amazon links before buying from Amazon. A small commission from Amazon helps pay for our time. It costs you nothing at all – your price is exactly the same. For more information, please see “How our Affiliate Links Work” in the sidebar, or our Policies page.

If you don’t want to buy anything right now, fair enough – but please consider supporting this blog by SHARING this post (using the Share buttons below) or by LIKING our Facebook page. BEST OF ALL – just SUBSCRIBE to our blog (really easy – see below next to Mrs. Average Joe Cyclist’s lovely face). It makes you part of our community, and makes sure you get free updates about all our posts, once a week. It also gets you special coupons, when retailers make these available to me. And at the moment, it gets you a free download of my Bike Buyers Guide. Thanks in advance – reader support keeps us going and makes it all worthwhile!