This video is a fascinating portrayal of a cyclist getting doored in New York.

The cyclist was wearing a helmet cam and caught the entire incident on video. Here’s a still that shows the accident about to happen.

Luckily, he wasn’t hurt badly. The event took place in New York, and the video shows an interesting slice of New York life. Notice that while the slightly injured cyclist tries to crawl out of the bike lane so as not to impede other cyclists, every one else just stands around in the bike lane for ages, sending passing cyclists out into the traffic.

The traditional advice to avoid cyclists getting doored is to ride at least four feet from cars.

In this video, you can see that the cyclist could not do this because the fairly narrow bike lane is right next to the car lane. At one point you hear the cyclist say that he gets ticketed if he doesn’t ride in the bike lane, but then he gets doored if he does.

Yet another no-win situation for cyclists. As long as cyclists remain at the bottom of the road-users totem pole, we will have to keep dealing with – and surviving – these no-win situations that cause cyclists getting doored.

The only way out would be to go and live in Amsterdam, where there are more bikes than citizens, and one can choose to cycle on a variety of routes that are reserved for bikes only – so that people can actually bike safely. And bike with their children – imagine that! 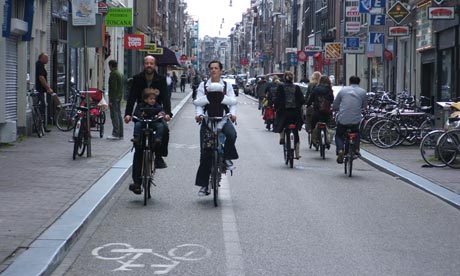 Unfortunately, it is pretty much impossible to immigrate to Holland (yes, I checked. My only way in would be to somehow manage to marry a Dutch woman, and I cannot imagine my wife would take kindly to that).

So in the meantime, for those of us trapped in the time and space  continuum that is early 21st -century-not-Amsterdam, all we can do to avoid getting doored is to try to keep at least four feet away from cars whenever humanly possible. Yet another reason why I am a huge fan of physically separated bikes lanes, such as the new lanes on Hornby and Dunsmuir in downtown Vancouver. And of course, if you can possibly get yourself a helmet cam, you will at least have evidence if somebody hurts you while cycling. Here’s my review of my GoPro Hero camcorder, which I keep permanently mounted on my handlebars.

Here’s my previous post about a man who was caught on helmet cam knocking a cyclist off his bike with his vehicle, then jumping out of his vehicle to attack the cyclist (who was down on the ground) – see Van Driver Knocks a Cyclist Over and Then Assaults Him – Watch the Viral Video.

Here’s a post about a man in London, randomly picking on a young woman just because she is pushing a bike, and telling her that cyclists deserve to die!

By simply clicking on one of the Amazon links

before buying from Amazon; or on one of the links for Jensen USA, Competitive Cyclist or REI. Small commissions help pay for our time. It costs you nothing at all except a click. Or, if you are planning a vacation, please book your hotel BY first clicking here for HotelTravel.com. Or SHARE this post (using the Share buttons) or LIKE our Facebook page. BEST OF ALL – just SUBSCRIBE to our blog (click on the link below, next to Mrs. Average Joe Cyclist’s smiling face). It makes you part of our community, gives you a free download of our Bike Buyer’s Guide, and gets you free weekly updates about our posts. Thanks in advance – reader support keeps us going and makes it all worthwhile!