You are here: Home / Bike Commuting / Bike Safety / Can You Think of a Collective Noun for Cars?
Pin
Share
Tweet

A Collective Noun for Cars

Isn’t it strange that we have no collective noun for cars? Especially given that traffic has become the defining motif of modern society. After all, many people spend more time in traffic than they do eating meals with their families! 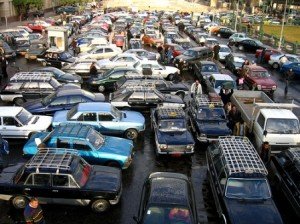 Cars in Cairo are stuck in traffic jams like this 24/7,
according to photographer walid.hassanein.

Cyclists are often able to zip past traffic jams, but we are nonetheless heavily impacted by hordes of cars. For me, the vast number of cars on the roads is the single greatest thing that detracts from my cycling experiences – I would prefer snow, steep uphills, extreme heat or monsoon-like rainfall over heavy car traffic, any day.

I thought perhaps “traffic” might be the appropriate collective noun. But in his book Traffic: Why We Drive the Way We Do, Tom Vanderbilt explains that the word “traffic” originally referred to trade and the movement of goods, and was a positive word. Then it came to also refer to the people who were moving goods. And as “traffic” meant people moving things to trade, it all came to mean people moving vehicles in pursuit of commerce. Which is pretty much what it means today, since the worst traffic jams occur as millions of people try to get to work. In any event, “traffic” means cars and people, so it cannot be the right collective noun for cars. 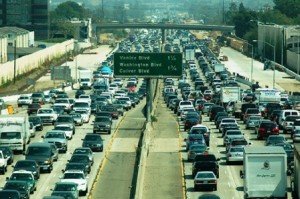 As “traffic” isn’t the right collective noun for cars, I tried to come up with a few possibilities:

None of these are perfect. Can YOU think of a perfect word to describe large quantities of cars?