Just when the soggy Vancouver weather had got me to thinking that Christmas and bicycles cannot possibly be connected, I learned from the Vancouver Sun that there is a small company in Portland, Oregon that delivers Christmas trees by bike! Max Kirchoff calls himself Yule Dispatcher, and runs Trees by Bike. Max started his company after receiving a lot of honks of encouragement while endeavouring to bring a Christmas tree for himself home by bike. That time he did it with a backpack, but for his commercial venture, Max uses trailers and eight cyclists.

Trees by Bike donates 10% of its profits to charity, and has grown by more than 400% this year (that’s statistics-talk for: the first year he sold 40, this year he’s selling 200). And they ain’t cheap, ranging from $32.20 to $50. Customers are prepared to pay a premium for convenience and a clean conscience, it seems. And they are so happy to get their trees delivered by cyclists that they tip generously, and often invite the cyclists in for cookies and hot chocolate.

Good for them. I’d do the same if someone offered that kind of service here.

And talking of Christmas and Bicycles, in London there is a Christmas Tree that is made out  of bicycles (taking recycling to new heights)! 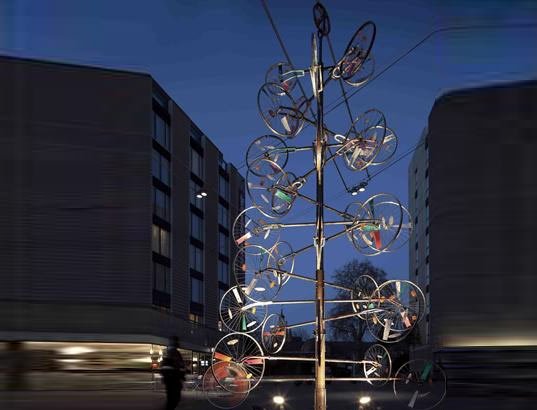 This sculpture stands in Bermondsey Square in London, and is made out of 35 wheels. It was designed by Sarah Wigglesworth Architects, and uses wheels from the British charity Re-Cycle (which restores old bikes to ship them to Africa).

Here in Vancouver, Alex P won this Christmassy t-shirt from the City of Vancouver for his photo of snowy bike commuting in Vancouver: 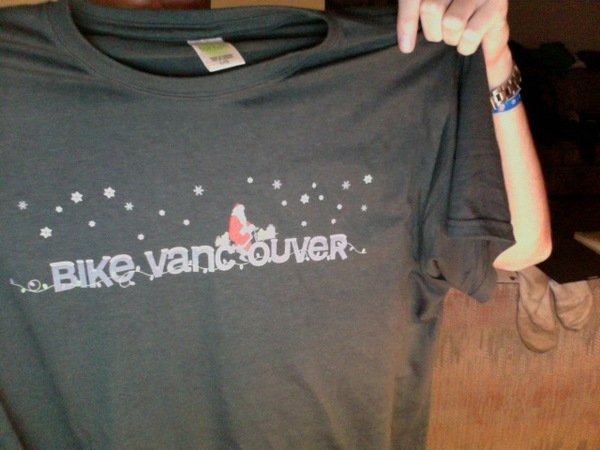 Does anyone know of any other interesting connections between bicycles and Christmas?