A BionX PL-250 electric bike kit can transform your bike into an electric bike in just one hour. Suddenly, you’ll be able to bike faster and further than ever before!

I decided to get a BionX electric bike kit after experiencing some health problems that stopped me from doing strenuous activities for a while. Retrofitting my trusty Devinci commuter bike with a BionX PL-250 electric bike kit seemed like the perfect solution.

The Promised Benefits of the BionX PL-250 Electric Bike Kit

The cost was a bit intimidating – but the rewards promised to be great. I would be able to travel in an environmentally friendly way for pennies a day, while boosting my cardiac health, because the BionX electric bike kit merely assists – the cyclist still has to peddle. So I went ahead and ordered the Bionx electric bike kit from my friendly bike shop. I asked them to install it as well.

Anyone half-way handy can install the BionX kit personally; it’s definitely not rocket science. Essentially it involves replacing the bike wheel (which houses the engine), putting the battery bracket on the down tube, mounting the control console on the handlebars, and connecting up the cabling (so that the brakes can function as cut-off devices, and to connect the battery to the wheel).

Then came the happy day that I  got to test drive my new electric bike. Before I set off, I had fully charged the rather heavy battery, just by plugging it into a wall socket. I slid the battery onto its mount, and locked it down. I have had problems with the BionX mounting on other bikes, but not on this particular bike. 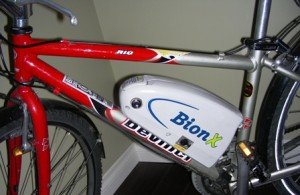 I set off from my (then) home in East Vancouver, en route to my (then) fiancée’s condo in New Westminster, equipped with a large map, as I had never done this route before. Wish I had had a Garmin Edge Touring  GPS Bike Computer (reviewed here) – the trip would have gone a lot better!

I decided to skytrain the first stage of the journey, as far as Patterson station, because according to my map, the bike trail from Patterson to New West was a dream. Dotted green lines denoted the 7-11 BC Parkway, apparently an off-road bike trail where I could get the hang of the new system in peaceful green safety.

I got off at Patterson skytrain station, where I was vastly relieved to find that there was an elevator to get me and my rather heavy bike down to ground level.

I set off happily. My first ride with a BionX electric bike turned out to be a joyful experience. I have dreamed of being a superhero since I read my first Superman comic at age five, and it had finally happened. With the BionX PL-250 electric bike I was suddenly Bionic Biker, fairly flying up hills with the greatest of ease. It was exhilarating! Suddenly I could really imagine giving up my family van and embracing an environmentally friendly transport form. Also, the BionX electric bike system is SILENT, so most people did not know I had an assist!

The BionX electric bike kit utilizes a battery that charges a motorized back wheel.

It offers a choice of four levels of assistance, as well as a throttle on a handle-bar mounted console, for an extra boost when needed (useful when pulling off).

Pedalling is required, and the amount of assistance provided is proportionate to the amount of effort you put in – the harder you pedal, the more it will help you out. You can also switch to zero assistance on flats and downhills.

To prolong battery life, braking recharges the battery. Also, you can choose from four levels of resistance on downhills, which saves your brakes while at the same time charging the battery.

In short, the whole system is quite brilliant – a triumph of clever engineering that I would say justifies its steep price.

I pedalled along happily for a while, going much faster than usual on uphills, and saving the battery on all the flats. Although the BionX electric bike kit adds a hefty 30 pounds to a bike, it is still perfectly easy to pedal it on muscle power alone on flats.

About 10 minutes into the trip I discovered that the dotted green line which seemed so easy to follow on the map is nowhere near as easy in real life. First of all, it was constantly interrupted with traffic intersections. Second, I was sometimes forced to divert onto the road for brief sections. Third, sometimes when I did that, I could not find the trail again.

Also like many other bike routes, the 7-11 BC Parkway often simply peters out, with no signage – so that all of a sudden I would find myself in a parking lot. After Edmonds skytrain station I got lost several times, and kept having to make my way back to the station to try again.

By that time, the sky had become much darker, and it was getting harder to see, even though it was only around 3 in the afternoon. I wandered around miserably for a while, peering hopelessly into the distance in search of the green 7-11 signs. I stopped intermittently to peer rather hopelessly at the map, which I had by then realized was – like the signage – woefully inadequate. My cheerful Warrior Spirit was by now beginning to slip, just a bit.

At last I found the trail again, somewhere in the region of Edmonds skytrain station. I set off again at a brisk pace, enjoying the relatively effortless feel of biking with BionX electric bike. This was more like it. I pedalled for ages, and began wondering when I would see my first sign of New West. The odd thing was that the terrain just kept seeming almost exactly the same. I concluded that gently decaying pavement underneath a skytrain line probably looks the same everywhere.

Around then, a strange meteorological phenomenon occurred. Although it is many years since I have lived in Africa, I was suddenly assaulted by a torrential equatorial downpour. The wind was smashing the rain into my face, so that I could hardly see. Every item of my clothing was wet through and clinging to me. I began to shiver. Bionic strength could not make up for this misery – my cheerful Warrior Spirit plummeted. Whose stupid idea was this, anyway?

At yet another intersection I pressed the button and waited miserably, well aware that I was the only person outdoors for miles around. The pelting rain seemed to be spurring motorists to increase their speed, as they were all racing down the hill. The light turned red for them, but they simply sped straight through. I waited patiently.

Almost Run Over by a Car going Backwards!

Finally, the motorists noticed the red light. One of them skidded to a halt halfway across the intersection. I set out to cross the road, then had to run backwards very fast because the driver began backing into the intersection, entirely oblivious of me – despite the fact that I was wearing bright yellow and resembled nothing so much as a gigantic, furious bumble bee, jumping up and down and waving wildly.

On the next green pedestrian light I succeeded in crossing the street, my cycling sandals squelching loudly with each step. I climbed miserably back on my electric bike to continue my odyssey, thinking, “Am I there yet?”

Seemingly hours later, the rain finally let up, but still I could see no sign of New West. I decided to stop and ask for help. Two helpful young women told me that the skytrain station I was approaching was Patterson – the one I had set out from two hours ago! How did that happen? Was the downpour some kind of twilight zone? Was I doomed to be lost forever, cycling in a monsoon, eternally returning in an infernal circle to Patterson skytrain station? By now, I was no longer feeling like a Green Warrior. I was just totally depressed. I realized I must have accidentally headed the wrong way after the lost-at-Edmonds fiasco. (Needless to say, this was before I got a Garmin Edge Touring  GPS Bike Computer (reviewed here), which now saves me from getting hopelessly lost.)

I debated what to do. I could just hop on the skytrain and go back home, or I could skytrain out to New West. I was too wet and miserable to make a decision. So I swallowed my pride and phoned my fiancée to discuss (and secretly, to look for sympathy). Once she realized that I had been cycling rapidly and bionically for two hours and was now back where I started from, she hurt my ear with a great bellow of laughter. So not helpful.

When she was done laughing, Maggie suggested I skytrain to Columbia station, where I would be just a short bike ride from her condo. So I got back on the skytrain. I stood there in the last carriage, clinging to my wet electric bike with one sodden glove, and the slippery metal pole with the other. Water was running down off my helmet and plopping onto my nose, but I did not have any free hands to do anything about it. Every time I moved, I squelched. I was well aware that everyone in the carriage was staring at me. Mercifully, no one laughed. Not out loud, anyway.

So OK, this was not the greatest ride of my life. But on the plus side, the BionX electric bike was a dream. It kept going the whole time, unperturbed by the pelting, soaking rain.

My love affair with electric bikes had begun, and it will last for the rest of my life.

The BionX electric bike unit was completely waterproof. In fact, I have ridden BionX electric bikes in pelting rain, day after day, and even in snow, without ever having a problem. One day my drive chain and gears froze and I could not pedal, but the BionX engine got me to work!

The BionX PL-250 electric bike did all I needed it to do. It got me cyling again, and it got me healthy and fit again (research shows that people with electric bikes often get fitter than people with regular bikes, because they bike more often). Eventually my commute changed to include very steep, very long hills, and I upgraded to a BionX PL-350 electric bike (although I still keep my PL-250 electric bike as a backup). Together, my two BionX electric bike kits have got me so fit that I now routinely bike 50 or 60 km a day on the weekend, without an assist.

My advice: if you need an assist and have a route that does not include monstrous hills, the BionX PL-250 electric bike should suffice to transform you from a car driver into a Green Warrior on a bike, leaving younger, fitter cyclists watching your disappearing tail lights and wondering what happened! 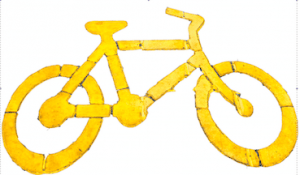 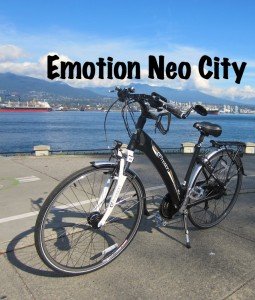