The Vancouver media has just launched another attack on Vancouver cyclists. On Tuesday the Vancouver Sun ran an opinion piece by Rob MacDonald entitled “Downtown Bike Routes are a Disaster”. And tonight Global headlined the news with a promise to tell us more about:

“The growing anger over Bikes Lanes – why they’re very much becoming a public safety issue.”

Both of these “news items” were full of smoke and mirrors. And both were journalistically unsound and utterly illogical. What is the agenda, and who is sponsoring this assault? 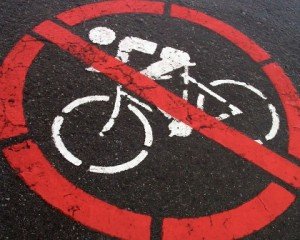 MacDonald’s article: A Tour de Force of Smoke and Mirrors

The by-line on MacDonald’s article claims that he “financially supports cycling events in Vancouver”. What does that mean?

Like the entire article, it’s nothing but smoke and mirrors. MacDonald simply throws out a series of gross exaggerations, without ever once deigning to actually substantiate anything with facts. His outrageous statements include:

“There was close to zero public consultation before expanding the Dunsmuir bike lane.” (Do we ever get consulted about the millions spent on roads for cars???)

“After thousands of complaints about the Dunsmuir fiasco.” (Thousands? Where is the data? And fiasco? Talk about inflammatory!)

“The massive expansion of the bike lanes” … (Massive? Puh … leeze … all we now have is the bare bones of a safe cycling network in Vancouver. If the expansion seemed large, it was merely because of the pathetic state of bike lanes before.)

MacDonald also refers to the recent modest but solid improvements to our bike lanes as “this lunacy,” and alleges that they have given rise to serious safety concerns (more about this last point below). Finally, in a piece of inflated rhetoric that would have made Churchill blush, he calls for the removal of the new bike lanes, stating that this would:

“rebalance the traffic system and preserve economic vitality in the downtown Vancouver core.”

First off, the notion that the traffic system has ever in living memory been balanced in downtown Vancouver is ludicrous. Second, the notion that a couple of bike lines will destroy Vancouver’s economic vitality is beyond exaggeration – it is a blatant, self-serving lie.

This article would not have earned a passing grade in a first year journalism course, yet the Sun published it anyway.

The news item on Global was almost as bad as MacDonald’s embarrassingly bad article. Global stated that “many business owners and downtown commuters have had enough” of the bike lanes.

How many is “many”? Three? Twelve? And where is the data to back up this claim?

The only people interviewed on this story were self-serving business people. And see this post to show how these business people simply continued to LIE about the impact of the bike lanes. If Global wanted balanced reporting, they should have stopped a cycling commuter and got his or her opinion. If it had happened to be me, I would have told them how the lanes have utterly transformed my experience of cycling in the Vancouver core – from downright terrifying, to an absolute joy (absent-minded pedestrians and motorists notwithstanding).

The most outrageous part of this news item was blaming the bike lanes for the stupidity of motorists. The narrator states:

“The lanes are supposed to keep cyclists safe, but check out this security video which shows a collision between a car turning right in front of a rider, in the right hand bike lane. Cameras at the St. Regis hotel have captured five such accidents since the bike lanes went in last June.”

What I saw on this video was a motorist turning dangerously in front of a cyclist, cutting across a very clearly demarcated bike lane, without bothering to check, and thereby causing an accident.

To blame this accident on the bike lane is almost insanely illogical.

This accident was not caused by the bike lanes; it was caused by the same old same old: motorists who endanger both cyclists and pedestrians by their selfish and stupid driving. Did you know that nine pedestrians have already been mown down and killed by motorists in Vancouver this year?

I am furious that Global had the gall to use this accident as evidence that the bike lanes are “very much becoming a public safety issue” – the safety issue is the same as it has always been: stupid, selfish people driving huge, dangerous vehicles. Cyclists are commonly injured or killed by cars making dangerous right turns in front of them. Most of the time, there is not a divided bike lane to be seen.

A bike lane is not required to injure cyclists – all that is required is a stupid driver, anywhere.

The other alleged safety issue raised by both MacDonald and Global is that fire engines are unable to turn into roads that have divided bike lanes.  MacDonald states:

“The city’s transportation department says the “divided” bike lanes are safer for cyclists. Tell that to the cyclist who recently T-boned a delivery truck on Dunsmuir in the bike lane, and the fire truck crew who could not reach her for 20 minutes because the divided bike lanes prevented the fire truck from turning from Seymour onto Dunsmuir.”

First of all, note the way MacDonald subtly blames the cyclist: that mean old cyclist T-boned that innocent truck! No, what presumably happened was just what happened in the video: a person driving a truck pulled across a bike lane without checking for cyclists.

Second of all, why on earth was a fire engine even required? As an immigrant to this country, I have always been astounded that when someone trips in the street, an entire giant fire engine is despatched to deal with the incident. When I first got here I called for an ambulance after a drunken pedestrian stumbled outside my house and cut her forehead. Imagine my amazement where not one but two fire trucks showed up! Twelve firemen applied a band aid, and then left.

The woman was not on fire! And there was absolutely zero chance that she would suddenly burst into flames. So why on earth did the incident require two fire engines?

The same can be said for the unfortunate cyclist who could not be reached by the fire engine. She was not on fire; she was not about to burst into flames – so why was a fire engine even required ?

In this particular instance, could the firemen not have picked up their little medical bag, got off the truck and walked to the cyclist? In the bigger picture, do we really have to pollute the atmosphere to this extent to get medical help to people? In a downtown scenario, medical help could be rendered way quicker by paramedics on bicycles, and there would be no need to pollute the atmosphere and crowd the road with bloody great fire engines.

To finish off on a balanced note: Global rounded off the news hour with a cute story about Lawrence Carlson, a farmer who does not need a car: he has used his ingenuity to fix an electric bicycle deemed irreparable – with a bungee cord!