This post is about some of the main benefits of separate bike lanes for cyclists. Benefit #4 may surprise you! Benefits include safety, and the perception of safety. And other stuff too, such as simply having fun!

It seems clear to us that as far as possible, motorists and cyclists should not share space. We don’t ask people to walk on the street – and then pass a law that requires them to wear walking helmets, pretending these will magically save them from being killed by huge vehicles. Instead, we build sidewalks so that people can walk in relative safety. Now, we just have to build separated bike lanes as well, so that people can ride bikes safely.

Yet some people argue that building separated bike lanes is unnecessary. Simply force everyone to obey the law at all times, and cyclists will be safe, they say. However, forcing people to comply with the law 100% of the time is not actually possible. There has never been an instance of this approach succeeding in keeping cyclists and pedestrians safe. On the other hand, researchers have discovered some surprising benefits of separated bike lanes.

Of course, separated bike lanes are far safer. Mixing up vulnerable cyclists with larger vehicles results in many deaths and injuries.

I wrote in depth about the benefits of separated bike lanes here. For some reason, this post was seen as controversial and attracted some trolls. I do not enjoy trolls, and will not engage with them.

Video that Shows the Dangers of Painted Lanes

The video below makes the point that separate bike lanes must be physically separated. Painted lanes don’t work because many motorists ignore them. This video has had more than 28 MILLION views, and is pretty impressive.

The message is clear: use separated bike lanes whenever possible to protect your life.

Even just the possibility of being injured or killed by cars is intimidating. Research clearly indicates that many more people would like to commute by bike, but are too intimidated by cycling next to cars. This graphic sums it up:

Who can blame them? Being on a bike right next to several tons of rapidly moving vehicle is intrinsically unsafe. It’s not like being afraid of roller coasters – motorized vehicles really can kill you.

Cyclists and Trucks in London 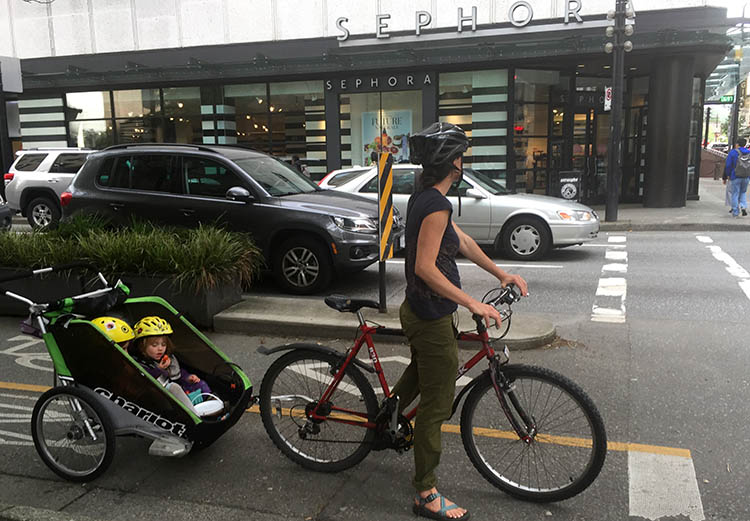 Sharing a Lane with a Bus … While on a Bike

Then there is also the strange fact that many bike lanes are shared by buses and bikes. In that situation, the disparity in size is even more intimidating. As Mrs. Average Joe Cyclist has said a few times: “Putting bikes and buses in the same lane – whose brilliant idea was that?” She’s right – there is NOTHING fun about having a bus a few feet behind your tail light.

Related Post: 7 of the Best Bike Lights for Night Riding and Commuting

Yes, most bus drivers are polite and careful around vulnerable road users. After all, they are human beings. I happened to speak to one once, and he confided he lives in fear of killing a cyclist.

However, I personally witnessed a bus run a cyclist off the street, on a designated “bike route.” The cyclist escaped by hopping his bike up onto the sidewalk. I was just behind, and I thought, “If that was me, I would not have been athletic enough to hop like that, and I would have been hit.” The cyclist pulled up next to the bus at the next stop and yelled at the driver, “What would have happened if I couldn’t get out of the way?” The bus driver looked at the young man as if he was a tree stump, not somebody’s son, and said: “I guess I would have killed you.”

I tried to persuade the cyclist to report the incident, as I would have been happy to be a witness, but unfortunately, he declined.

Even if laws could force people to drive safely, it would still not be any fun for motorists and cyclists to share space. The aim should be for cycling to be pleasant and fun, not merely non-fatal.

One London cyclist commented on the situation. “Not dying is a low bar. Aim for HAPPY Cycling.” This same cyclist went on:

“There are plenty of things I can do and be pretty sure I won’t die as a result of. That generally isn’t a sufficiently good reason for me to go out of my way to do them; I want to actually ENJOY them. To encourage mass cycling, you need to provide an activity that is not only non-fatal, but actually pleasant. Playing musical chairs with smoke-belching rhinoceroses is not everyone’s idea of fun, fatal or otherwise.” (Rachel Aldred.)

The point is that people are prevented from cycling not only by a fear of death or injury, but also by a lack of the decent cycling infrastructure that would make cycling pleasant. For many, it is so far from fun that it can cause serious problems. Here’s a comment from a woman who commuted by bike in London for four years:

“I feel the hatred is getting worse and worse, and am at my wits’ end. Because I do not pedal in the gutter or door-zone, I am frequently the target of deliberate dangerous driving and abuse. The repeated attempts on my life (because that is what they are) are getting so bad that I keep having nightmares, particularly while I’m just nodding off … I hope that by using some of those flight-or-fight chemicals by the actual exercise of cycling I might not get some serious anxiety-related symptoms, but I’m considering stopping the very thing that used to make me feel SO happy, SO liberated and independent.”

In short, there is just little that is fun and pleasant about competing for street space with much more powerful competitors, some of whom may even hate you merely for existing.

Most Motorists are Good People

Fortunately, the majority of motorists are extremely careful and respectful around cyclists – after all, what sane and decent person wants to kill someone on their way to work? Many times, my heart is warmed when motorists politely stop for me. Just last week, I had a motorist slow down to yell through his window at me: “LOVE the lights!” (I make a point of always having very bright bike lights, including very cheerful monkeylectic lights – reviewed here).

However, when cyclists (and other vulnerable road users) and motorists are forced to share road space, it only takes one motorist who is careless or hate-filled to ruin a cyclist’s day – or even kill a cyclist, or kill many cyclists, as sometimes tragically happens. 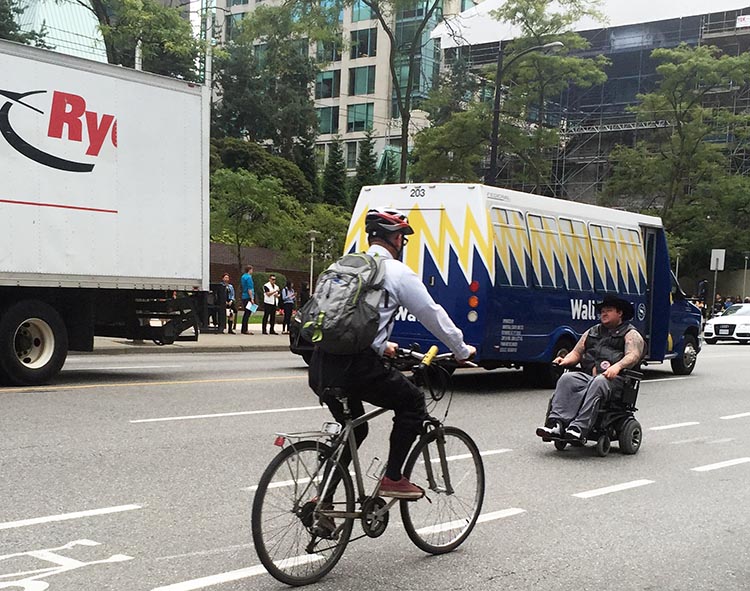 A research project has shown that cyclists on separated bike lanes are breathing a better quality of air than those pedaling on traditional roadside bike lanes.

The researchers measured the ultrafine particulate matter that is spewed out by motorized vehicles. They parked a car on the median dividing a separated bike lane from the cars, and measured exposure to the offending particulate matter on both sides. Effectively, they were comparing air quality in two zones that were separated by a mere few feet.

Amazingly, researchers found a significant statistical difference between the two zones. Hard to believe that a few feet could make a difference, but the findings were pretty unequivocal: air quality is better in separated bike lanes than in traditional roadside bike lanes.

Also, the difference was even more pronounced when traffic volume was high. So the more pollution there was, the greater the benefit that was provided to cyclists by separated bike lanes. And let’s not forget that pedestrians are even further away from the cars, so they are also being protected by the separated bike lanes.

The photos above show Hornby Street in Vancouver before and after it got separated bike lanes. The man in the left-hand photo was not only endangered by the surrounding traffic, but was also breathing in a lot of fumes – and I am pretty sure he was not relaxing and having fun.

Cyclists are already taking a load off the health care system by keeping themselves healthier than non-exercisers. Turns out separated bike lanes will increase this benefit, not only by reducing injuries from cars, but also by reducing the amount of pollutants cyclists breathe in.

And let’s not forget the horses! The other day I snapped this photo of horses enjoying the separated bike lane on Hornby Street in Vancouver. Nice to know that these horses were safe from cars, and were also breathing in less pollution through those giant nostrils of theirs.

Yes We Can (Take the Streets Back)!

I wrote a post a while ago to remind people that just a very short time ago, the streets belonged to pedestrians, cyclists and horses, and CARS were the (very frightening and unwelcome) intruders – see #ReplaceBikewithCar.

Especially recently – due to the pandemic, many cities all over the world are taking space away from motorists and giving it to cyclists. This is to give car-free people a safe way to commute. See our post, Cycling and the Post-Covid Transformation.

Some people say that the rest of the world just cannot be “like the Netherlands.” As if cyclists who don’t live in the Netherlands just have to accept being in danger all the time. But it’s not true.

In the city where I live, massive changes have been made in recent years. Downtown Vancouver has gone from being scary and unsafe, to being cyclist friendly . Take a look at this guy leaving work in the heart of downtown Vancouver – what could be easier and more people friendly than this?

The photo in the tweet below is an aerial view I photographed of the separated bike lane on Dunsmuir St. in Vancouver. This is off peak hours – at rush hours it gets very busy. It does not show in the photo, but within this one block commuters have multiple choices. They can choose whether to commute on foot, on a bike, in a car, on a bus, or in an underground train.

This is how all streets should look – safe space for pedestrians, #cyclists and motorists in downtown #Vancouver! pic.twitter.com/SDr4CZY91L

Children can Use Separate Bike Lanes to Cycle Safely

And below is a little girl cycling on one of the separated bike lanes in Vancouver. This one is on Hornby Street (where one business man cynically complained that bike lanes would deprive his business of parking spots, while at the same time deliberately posing so that the photographers would not capture the empty parking garages right behind them!)

This little girl looks a lot like one of my kids. And I STRONGLY believe that her life is worth more than a parking spot!