I am happy to report that I quickly heard back from BCAA Bike Assist, after my recent less than complimentary post about their services. In fact, Ken Cousin, BCAA Associate Vice President, Road Assist, went to great lengths to contact me, posting a comment on my blog, emailing me, and finally phoning. We had an interesting talk.

First, hats off to the man for being so good-natured about what he ruefully referred to as my “cutting” remarks. (I can’t really take credit for that – I did have very good material to work with!) Also, I am happy to say that Ken made me feel much better: partly because he offered an apology, but mostly because he told me hopeful things about the whole program.

I am happy because, like Mulder, I want to believe. 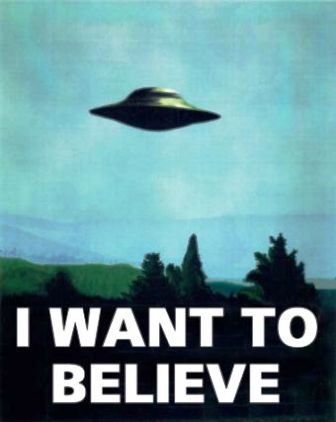 This program is just such a good idea that I want it to succeed.

That would be a win-win for cyclists and the BCAA. And who knows, if there was a safety net for ordinary people who don’t know much about fixing bikes (like me), maybe more of them would dare to try commuting by bike.

Ken pointed out that in the course of the last year BCAA has had half a million calls, of which just 200 were from cyclists. So I get that we are not a very significant part of their clientele – yet. However, he said that BCAA Bike Assist has partnered with Norco, and in general is doing its best to learn how to offer this service well. As trailblazers in this field, it’s not easy. He said he planned to contact the VACC for advice, as suggested by many people who responded to this post. He also said that almost all of the BCAA technicians have received training on bike repairs, but that I had the bad fortune to get one of the very few who have not. He agreed with me that it was not the technician’s fault; it was BCAA’s fault for not training him.

Ken stated that the BCAA is committed to sustainability and to alternative transport options. For example, he told me that in the summer of 2009 BCAA offered roadside assistance to drivers in downtown Vancouver via technicians on bicycles! The technicians wanted to get into shape, and the layout of Vancouver is such that it was a viable option. Apparently these technicians carried gas, water and basic tools, and were able to deal with most of the problems that stranded motorists downtown.

I love the idea of people on bikes rescuing stranded motorists! It’s such a refreshing change from the depressing warfare that sometimes rages between motorists and cyclists.

And as I argued in a previous post (No Fun City to Become No Bike City?), there are many services that could be rendered by people on bikes, such as paramedic assistance. To me it’s all part of acknowledging that bicycles could be an integral part of a sustainable society, if we could just move past the ridiculous notion that modern life would grind to a halt without ubiquitous automobiles. As the old song goes, “Got along without you before I met you, gonna get along without you now.” The human race survived for millions of years without cars, and we could do it again.

In any event, BCAA is of course going to refund the money I paid for the ill-fated tube that lasted all of 5 minutes. He offered to refund my membership fees as well. However, after all he had told me, I thought it would be really interesting to retain my membership and call them out again one day.

The best thing Ken said: he can’t promise that my next experience of BCAA will be perfect, but he can promise that it’ll be better.

We shall see – and I sincerely hope that one day I will get to write a post about a wonderful experience with BCAA Bike Assist.