By the way, if you want to read about better but more expensive panniers, read my post about the Arkel Bug Pannier. This pannier converts from backpack to pannier and back again. EVEN better is the Two Wheel Gear Convertible Backpack, which is light weight, rugged and good looking – this great backpack is reviewed here.

First off, the bags are attractive and highly visible, available in grey, yellow or red. This is one of mine (I would have bought red, but they were out of stock): 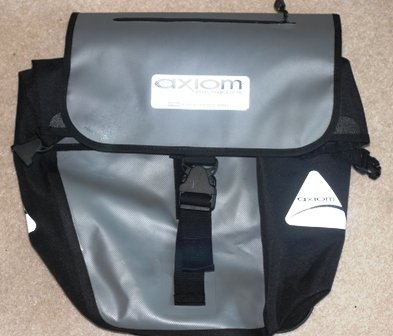 Even this grey color is highly visible because of all the reflective highlights on the bag.

These Axiom Stormfront panniers are entirely waterproof – I have transported my laptop inside these panniers in monsoon-like weather without getting a drop of water on it. This ability to withstand heavy rain comes from the polyester material of the bag, as well as from the fact that the top flap folds down over the bag for extra protection.

Also, the Axiom Stormfront panniers are spacious – the volume of the set is 33.2L, or 2028 cubic inches. Which basically means you can fit a large laptop and three changes of clothes into just one of them, and still have space left over for a couple of lunch boxes. So the size is ideal for bike commuting or bike touring.

The inside of the top flap features a zippered mesh pocket. I have found this very useful for keeping handy the kinds of things I need to find without having to dig around under my clothes and lunch boxes – such as keys, wallet, bike lights, and iPhone.

The outside of the top flap has a waterproof zippered pocket. This is only handy for extremely skinny things, such as maps, and a set of keys if it’s not too bulky (unfortunately, mine are – don’t know how that happens).

That’s it for the good news. Now for the bad.

Axiom Stormfront panniers come with lifetime guarantees. So you’d be forgiven for thinking they’d last a long time. That’s certainly what I thought. I was wrong.

In fact, I had to return my first set of Axiom Stormfront panniers after just a few months. On one of the panniers, the zipper on the outside of the top flap had become faulty. Basically the zipper runs over PVC coating that is there to keep it waterproof. But after constant daily use, the PVC coating had begun to degenerate, making it hard to open the zip, and compromising the waterproofness of the pocket.

Anyone know of some panniers that will actually last a lifetime?

Update 1: Amazon now sells Axiom Seymour panniers – a set of two for just $80! This is a great price, and they get very good reviews. Best of all – no zips!

Update 2: Reader and well-known avid cyclist Ulrike (see comments below) highly recommends the Axiom Monsoon Aero DLX panniers. She says: “slim-line, slate-gray Axiom Monsoon Aero DLX panniers, I regularly get compliments on them and when I wear one over my shoulder, it looks like a satchel not a big, goofy pannier. They are a very simple, Ortlieb-style, with a roll-top closure. They are quite deep, so for keys I punched a hole in the rigid plastic liner, threaded a thin chain through it, and then clip my keys to that. No problems whatsoever after 3 years.”


Note: If you want the very best in bike panniers, read my reviews of Two Wheel Gear panniers: the Backpack Convertible, and the executive Garment Pannier.